A new interactive map created by a consortium of advocacy groups (Ipas, the National Gay and Lesbian Task Force, and the SisterSong Women of Color Reproductive Health Collective) colors the 50 states according to their level of sexual and reproductive freedom. Visually, the result is familiar: the darkest blues — signifying the states with the least restrictive laws — are clustered at the coasts. Moving inwards, states turn purple, crimson and finally, in an island chain stretching from North Dakota to Oklahoma, fire-engine red. Interestingly, though, Ohio, with its dearth of hate-crime laws and its myriad restrictions on abortions, ranks as the least free of any state (Oklahoma, by contrast, was merely #46). New Mexico, meanwhile, came in number one. 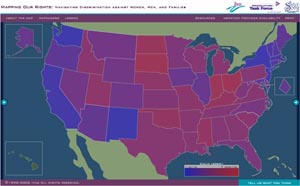 .
Click on the image to go to the interactive map. (Requires Flash)