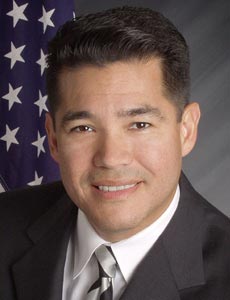 Last spring, an amendment was slipped into a bill reauthorizing the PATRIOT Act by Senator Arlen Specter’s chief counsel, Michael O’Neill, who was reportedly acting on the Justice Department’s behalf. The little-noticed but controversial provision allowed the Attorney General to appoint interim U.S. Attorneys for an indefinite period of time, eliminating the 120 day limit that had been in effect for more than 20 years. Today, as the Senate Judiciary Committee convened to examine the abrupt firings of eight federal prosecutors, this amendment took center stage and Specter, the committee’s ranking Republican, certainly seemed a bit uncomfortable. After all, the language inserted by his office allows administration loyalists to be installed as U.S. Attorneys for the remainder of the president’s term without receiving Senate confirmation. Once in place, they can potentially wield their prosecutorial power for political ends. Now, Specter is among a group of lawmakers who are seeking to rollback this provision.

This is a particularly troubling development for the judicial system, said Senator Dianne Feinstein, the California Democrat who was the first lawmaker to raise questions about the firings. “For over 150 years, the process of appointing interim U.S. Attorneys has worked well with virtually no problems,” she said. “Now, just one year after receiving unchecked authority in a little known section added to the PATRIOT Act last spring, the Administration has significantly abused its discretion.”

Questions have arisen as to whether this unprecedented purge of U.S. Attorneys was a calculated maneuver by the Bush administration to cleanse the justice system of prosecutors who weren’t playing ball with its policies. During today’s hearing, where four of the fired prosecutors were on hand to testify, committee member Senator Charles Schumer, who presided over the hearing, made clear he wants answers: Had U.S. Attorneys such as Carol Lam, who prosecuted the Duke Cunningham bribery case, been removed because they were bringing too much heat on Republican officials? Or, in the case of New Mexico U.S. Attorney David Iglesias, who received calls from two Republican lawmakers pressing him for answers on ongoing corruption investigations, were they fired because they didn’t bring enough heat on Democrats? And last, who is responsible for this house cleaning anyway, the Justice Department or the White House?

Much anticipated was the testimony of Iglesias, who was set to reveal the identities of the members of Congress who he says leaned on him prior to the November elections about an investigation involving state Democrats. But the lawmakers beat him to the punch, unmasking themselves recently, as they came under increasing suspicion, in the pages of the Washington Post. Both lawmakers, Representative Heather Wilson and Senator Peter Domenici, both of New Mexico, released statements playing down their interactions with Iglesias and saying, in essence, that they didn’t seek to pressure him. Rather, they claim they were simply doing him a favor and relaying constituent allegations that he was intentionally delaying corruption prosecutions.

Iglesias’ testimony directly contradicts the accounts offered by Wilson and Domenici. According to him, Wilson inquired about sealed indictments, something U.S. Attorneys are not allowed to discuss with lawmakers — or anyone outside of their legal team for that matter. Iglesias also testified that when Domenici phoned him, he asked directly if certain corruption cases would be filed before November. When Iglesias said that the cases were ongoing, he recalled that Domenici responded, “I am very sorry to hear that.” Then, he promptly hung up. “I felt sick afterward,” Iglesias testified. “I felt leaned on. I felt pressured to get these matters moving.”

Iglesias wasn’t the only purged U.S. Attorney to receive pressure from a Republican lawmaker over an ongoing investigation. John McKay, the former U.S. Attorney for the western district of Washington state, has said that he once received a call from the office of Doc Hastings, the Washington Republican, inquiring about the status of a voter fraud investigation involving Democrats.

The administration has asserted that Iglesias and McKay, among the other fired U.S. Attorneys, were let go because of performance issues. But members of the Judiciary Committee didn’t seem to buy this excuse. Expressing skepticism, South Carolina Senator Lindsay Graham, for one, pointed out that each of the fired prosecutors had held their positions for substantial lengths of time. If performance was truly the cause for the firings, he said, than the Justice Department had been asleep at the wheel for years. In depth performance evaluations, as well as the DOJ’s own statistics, also make this explanation seem dubious. For instance, the official reason why Carol Lam was axed was that she wasn’t prosecuting enough illegal immigration cases, though her office doubled the number of immigration prosecutions it brought to trial between 2006 and 2007. “I understand legally that we serve at the pleasure of the president, and that it is a unique position,” Lam said today. “But this was unusual and I am troubled by the future effects it will have on attorneys nationwide.”

The developments revealed today and those that have been reported over the past two months have far reaching implications for the justice system. “Not since the Saturday Night Massacre, when President Nixon forced the firing of the Watergate prosecutor Archibald Cox, have we witnessed anything of this magnitude,” said Senator Patrick Leahy of Vermont in his opening remarks. “It is vital that those holding these critical positions be free from any inappropriate influence. Their importance is reflected in that these appointments have traditionally, and are currently, subject to Senate confirmation.” Now, it appears that at least three federal lawmakers, along with the DOJ and the White House, have been attempting to use the justice system as a political tool. As Schumer put it, “US attorneys are servants of the law, not political operatives.”