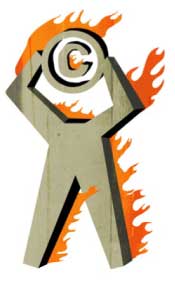 They all burned the Man. The punk bicyclists, the drunk faeries, the people painted blue. So splendidly did Larry Harvey’s 40-foot wooden hominid burst into flame that he and his friend John Law burned the Man again, each and every year since 1986, until everybody involved—last year, nearly 40,000 of them—simply became known as Burners. And the Burners built a Bedouin arts community called Black Rock City in the Nevada desert: a tent metropolis with its own “gift economy” that banned all commerce and its own government complete with a Department of Public Works. In short, they made a new Man—though maybe not a better one.

“I think it’s something that needs to be skewered and mocked,” says Law, Burning Man’s cofounder. He quit running Burning Man a decade ago, but not before he and Harvey began selling expensive tickets to the event (last year they went for up to $350), trademarked and split ownership of the Burning Man name, and licensed it to Black Rock City llc, a for-profit, limited liability corporation run by Harvey. Law believes the corporation has become unaccountable, so he’s challenging Harvey’s oversight in a California court—quite literally putting the fate of Burning Man in the hands of “the Man.”

Hence Law’s lawsuit, which would compel Harvey to open Burning Man’s financial books. Law thinks the corporation should give the public more say in the way it doles out $400,000 in annual arts funding. Alternately, Law would like to see the Burning Man trademark revoked, which could allow anybody to stage a Burning Man event or, to the horror of the event’s staunch anticonsumerists, market Burning Man products ranging from lipstick to skin flicks.

Burning Man’s attorney dismisses Law’s suit as baseless and his goals as unrealistic. “We’ve never talked about a principle of transparency as something we should be doing on all levels,” adds spokeswoman Marian Goodell, “because we are running a business.” And democratizing Burning Man’s arts grants “would advantage people who are members of scenes and live in cities and are personally popular,” says Harvey.

So is the lawsuit just a money grab? Not at all, says Law. Burning Man was built by misfits who spent more time mocking old traditions than building new ones. In years past, Law has joined fake protests against the movie Fantasia, dressed up as a clown to ride San Francisco buses, and hopped on a cable car naked. Law’s suit, he claims, is a challenge to anyone who would take Burning Man seriously. “That’s my prank; that’s my gift,” he says. “They need to poke some fun at themselves.”