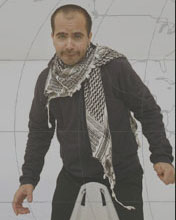 It’s not just a video game. A performance artist has been holed up in Chicago with a webcam and paintball gun trained on him. Right now Wafaa Bilal is out (late lunch?), leaving just a bedroom splattered with paint, so Web snipers are aiming for the plant instead. It’s a statement on that American combination of high-tech trigger-happiness and apathy toward Iraqis. I was going to suggest Bilal was inspired by this technology, “computer-assisted remote hunting.” But it’s much worse. According to his bio, Bilal grew up in Iraq, and his 21-year-old brother still there was recently killed by stray American gunfire. Maybe he’s trying to heal by reenacting the trauma, as they say. Black humor heals all wounds.

Thank you for the tip, Goode.