There was a mini-firestorm Monday when I reported that the average price for a gallon of gas is at its highest level ever and asked SUV owners to justify their choice of car in the comments. You can see the results here.

Today, a follow up. A study led by consumer groups shows that American households spend $1,000 more per year on gasoline than they did just five years ago. 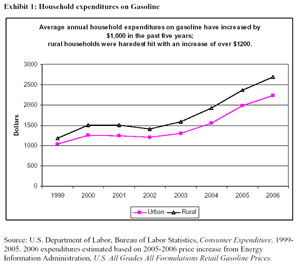 You know how every so often there is a news story about how ExxonMobil has set a new record for quarterly profits? They did it again in the first quarter of 2007. Their earnings from January to March of 2007 exceeded their already astronomical quarterly earnings record by 10%. Total take in three months: $9.3 billion.