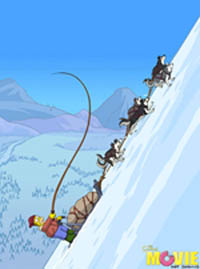 This weekend I was lucky enough to catch the aptly titled The Simpsons Movie at my local independent theater. With all the hype—7-11s transformed into Kwik-E-Marts complete with Squishees and Buzz Cola, annoying ads during other Fox shows—I was ready to be wowed. But what wowed me, I didn’t expect—the movie took on the thorny issue of environmentalism … well, sort of, if you count Homer fighting power-crazy environmentalists with motorcycles and dog sleds.

In the film, Lisa crusades door-to-door for the salvation of Springfield’s lake and, predictably, gets many of them slammed in her face; Homer’s her undoing, dumping a silo of “pig crap” into the lake that turns it into a seething, green, boiling pool of acidic sludge; and there’s an interesting twist, wherein, the EPA actually cares about the environment. Humorously, the EPA puts a huge, glass dome over the city to keep the lake’s toxins from spreading (they care more about the trees than the people of Springfield).

The Simpsons of course fight back and attempt to free Springfield from its doom in the dome and the EPA v Homer battle is surely amusing, but unfortunately, after 87 minutes of comedy, the sentiment that people should not drop “pig crap” into lakes is pretty much forgotten. Not that I was really expecting (okay, I kind of was) great pearls of wisdom from The Simpsons but I had hoped for more examples of criminal environmental degradation, especially since the mastermind behind everything Simpsons is from my home state of Oregon, a state with a long history of fighting the timber and fishing industries to preserve its unique natural beauty.