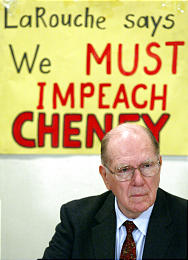 If you’ve always been confused by the Lyndon LaRouche supporters who hand you pamphlets when you coming out of the subway (anyway subway in America, it feels), you should check out Avi Klein’s article in the Washington Monthly. Those pamphlets, for many decades, have been the lifeblood of a bizarre movement that has been as ineffective as it has been tenacious.

In the almost forty years since its inception, despite spending hundreds of thousands of dollars a week in operations and annually printing millions of books and magazines, the LaRouche operation has had no significant effect on American politics. It is remarkable in its impotence.

Despite the unrelenting loyalty of his followers, LaRouche has never come remotely close to being elected president. In fact, no LaRouche cadre has been elected to office at any level higher than school board. Nor have his economic theories attained any kind of recognition. The LaRouche-Riemann Method, an economic model that LaRouche calls “the most accurate method of economic forecasting in existence,” has gone unnoticed by the social science indexes. Many former members admit to not understanding it.

In one perverse way, of course, the movement did work. For thirty years, Ken Kronberg printed, and all the other members edited and distributed, everything that LaRouche wrote, whether anybody understood it or not. If, in the late hours of the night, LaRouche determined that 50,000 copies of his latest essay on the Treaty of Westphalia needed to be distributed around the country, his followers did their best to oblige.

But no longer. The LaRouche movement is on its last legs. The 2008 election will be the first in 32 years in which LaRouche does not run for president. Share your LaRouche stories in the comments.