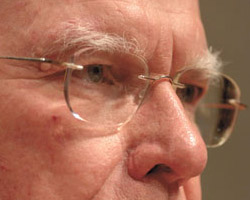 Is this the return of the summer showdowns between Capitol Hill Democrats and the White House?

The Senate Judiciary Committee moved a big step closer to contempt citations against top Bush administration officials today. Chairman Patrick Leahy (D-Vt.) ruled that White House claims of executive privilege “are not legally valid.” A Senate aide tells Mother Jones the committee could begin contempt proceedings as early as next Thursday if current and former administration officials do not comply immediately with the subpoenas.

More than four months have passed since the House Judiciary Committee voted to cite White House Chief of Staff Joshua Bolten and former White House counsel Harriet Miers for contempt. Bolten, Miers, and other administration officials had refused to comply with congressional subpoenas for testimony and documents relating to the U.S. attorneys scandal. But with the committee vote a fading memory, the full House still has yet to vote on the measure. On the Senate side, Leahy never followed through on vague threats to cite the President for contempt if the White House didn’t provide the documents Congress had subpoenaed. And despite a letter House Oversight Committee chairman Henry Waxman sent three months ago (PDF) requesting information on the 5 million emails the White House “lost,” they are still nowhere to be found.

The Democrats have made almost no progress in their efforts to obtain more information about the attorney firings. They have proven equally ineffective in holding the people stonewalling them accountable. The Democrats have been distracted by other issues, and they were outmaneuvered by a stubborn administration. For months, the Democratic leadership has held off on a confrontation with the White House, but Leahy’s ruling today may signal that they’re returning to the attack.

Some amount of distraction is understandable. With the much-hyped Petraeus report on Iraq in early September and the resignation and replacement of Attorney General Alberto Gonzales, the Dems had a lot on their hands. But the heart of the U.S. attorneys scandal—and the part the Democrats are most interested in—lurks at 1600 Pennsylvania, and the White House remains implicated, even if Karl Rove has resigned. If the Justice Department and Gonzales were fall guys to shift blame for the attorneys scandal away from the White House, as many on the left alleged, they did their job. Even after Gonzales’ replacement, Michael Mukasey, was confirmed in early November, the Democrats still failed to press for answers.

On November 5, House Judiciary Committee chairman John Conyers Jr. made what was widely reported as a “ninth and final” offer to the administration to stave off contempt citations for Miers and Bolten, agreeing to previous administration requests that interviews with senior White House staff not be conducted under oath. He even went so far as to file the contempt report with the clerk of the House—a move toward a full House vote. “Subpoena Showdown in House Grows Near,” CBS News reported. Conyers asked for a response from the administration by the end of the week. The White House quickly indicated it would not comply with Conyers’ request. But no House vote on the contempt citations came. Instead, the Democratic leadership backed off, choosing to focus on Iraq and the budget.

That was just the opening the administration was looking for, says James Horney, director of fiscal policy for the Center on Budget and Policy Priorities. “The president thinks it’s in his political interest to have a confrontation with the Congress over budget issues. Even if a majority of the people in the country doesn’t support what he’s doing I suspect he’d rather have people reading press accounts about this than about Iraq and a number of other issues.” Instead of battling over the attorneys scandal and voting on contempt charges or subpoenaing email records, Congress spent November bickering with the White House over budget issues and the war and didn’t pass a single major bill.

Meanwhile, the Democrats have been losing the battle on the president’s chosen ground: spending. After making no progress on passing the $22 billion of extra domestic spending they want for FY 2008, Senate majority leader Harry Reid offered to split the difference. But the White House, sensing weakness, held firm. Now House Democrats are worried they’re being lured into a repeat of the Bill Clinton-Newt Gingrich clash that shut down the government in 1995. Between pay-as-you-go rules, Iraq war funding, and a White House that won’t give an inch, the Democrats look increasingly trapped.

In recent months, outside groups have made the most progress on the accountability front. Earlier this year, two nonprofits, Citizens for Responsibility and Ethics in Washington (CREW) and the National Security Archive, sued to find out what happened to the missing emails. On November 12, they scored a big victory by obtaining a court order that forces the White House to maintain copies of all its emails.

Meredith Fuchs, the general counsel to the National Security Archive, says she was surprised Congress wasn’t being more aggressive. “It’s pretty remarkable that the Congress hasn’t done more,” she comments. “Congress ought to be asking the White House to explain what its doing with its records. These same kind of things happened with the Clinton administration and Congress was outraged.” CREW chief counsel Anne Weismann says she’d like to see Congress subpoena more information. “We have to operate within the court system and we have no way to compel a judge to rule on any of our motions,” she said. “I’d like Congress to ask for some of the same documents we have. Ask the White House to give them documents that show what the White House knows.”

Leahy’s ruling today may be a signal that the process is finally moving again. If the Judiciary committee does debate contempt citations next week, the full Senate could conceivably be voting on the issue before the end of the year. “The Senate Majority Leader has a very ambitious agenda for the next three weeks,” says Erica Chabot, a spokeswoman for Leahy. “But that doesn’t mean it can’t change should something develop” before Congress recesses over the Christmas holidays.

The House leadership has also signaled a willingness to proceed with contempt proceedings in December, and Brendan Daly, a spokesman for House speaker Nancy Pelosi, says part of the delay was the time it took for the leadership to consult members and make sure they had the votes. “It appears that we do [have the votes] and the speaker said it’s likely we’d go forward,” he said. Still, some in the blogosphere have questioned the leadership’s commitment to the issue. On November 16, TAPPED‘s Adele Stan asked why freshman representatives had been asked to whip the contempt vote. “Why, in the House, where seniority is everything, has the fate of the U.S. Constitution been left in the hands of the freshman members?. . .Why is this fight not being fought without quarter, floor vote after floor vote?” Daly says the freshmen were the perfect choice. “They are the ones that are very concerned about this. Many of them got elected on restoring the integrity of the Congress and this is an important part of that.” Still, the rhetoric at the top remains strong. “Pursuing contempt is crucial,” Conyers said in an email to Mother Jones. And Daly, the speaker’s spokesman, notes, “It’s the integrity of Congress that’s at stake here.” But no one on either side of the Capitol was particularly committal about bringing contempt citations to a vote before the full Congress—or subpoenaing email records—before the end of the year. And no one had a good answer for the most obvious question: If holding the administration accountable is so important, why is it taking so long?