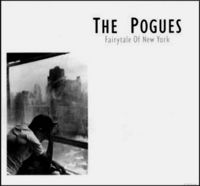 That was fast. I reported, like, just a few seconds ago that BBC Radio 1 had decided to cut two sections of the Pogues 20-year-old Christmas song, “Fairytale of New York,” including the word “faggot” and the line “old slut on junk.” Now comes word that they’ve reversed the decision and will play the original version of the song. Radio 1 “controller” Andy Parfitt released this statement to the press:

After careful consideration I have decided that the decision to edit the Pogues song Fairy Tale of New York was wrong. Radio 1 does not play homophobic lyrics or condone bullying of any kind. It is not always easy to get this right, mindful of our responsibility to our young audience. The unedited version will be played from now on. I want to stress that everyone at Radio 1 and its music team take the issue of language very seriously and enormous care is taken in ensuring that offensive language is edited from records where necessary. I understand absolutely, in a climate where questions about editorial standards are at the fore, the thinking behind this decision. While we would never condone prejudice of any kind, we know our audiences are smart enough to distinguish between maliciousness and creative freedom. In the context of this song, I do not feel that there is any negative intent behind the use of the words, hence the reversal of the decision.

Just to be clear, here are the lines in question:

You’re a bum
You’re a punk
You’re an old slut on junk
Lying there almost dead on a drip in that bed.
You scumbag, you maggot
You cheap lousy faggot
Happy Christmas your arse
I pray God it’s our last.

A UK gay rights campaigner said the reversal was evidence of double standards since racist terms would never be allowed, but let’s be honest: 1) no matter how much you don’t like the f-word, it’s no n-word, and 2) in the context of the song, it’s obviously meant humorously. In any event, even though it doesn’t really apply here, it’s probably a good time to remember my mantra about “offensive lyrics”: art about prejudice isn’t necessarily prejudiced.

And okay, fine, here’s the video: