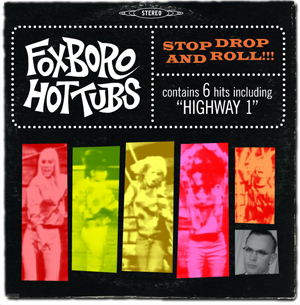 Ah, so this is why news stories are kind of confused about new Green Day material: the Bay Area trio have apparently released six new songs under a pseudonym, Foxboro Hot Tubs. The “official” web site for the Tubs features an EP called Stop Drop and Roll, whose look and sound is decidedly ’60s garage rock, but with some eyebrow-raising similarities to Green Day’s oeuvre, plus the bands link each other on MySpace, and that’s a dead giveaway.

Green Day of course have a history of taking on alternate identities. Back in 2003 they released a new-wavey album under the name The Network, and to this day have never confirmed it was them, although everybody in the world knew. If Green Day are in fact the Tubs, they’re taking the secret a little more seriously: a spokesperson for Reprise, Green Day’s label, told MTV news he “knew nothing” about Foxboro Hot Tubs.