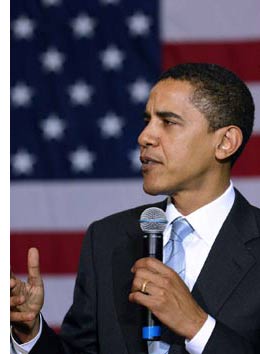 A little more oppo research on Obama has hit the press. A few days back, a rival campaign gave Politico a 1993 survey that Obama filled out on which Obama indicated positions on the death penalty and on gun control that are slightly different from the ones he holds now.

Now someone has given a similar survey, this time from 2003, to ABC News. Again, Obama’s answers are ever-so-slightly different than his current positions. Follow me, after the jump.

In that 2003 questionnaire Obama vowed to vote to repeal the USA PATRIOT Act, though he said he “would consider replacing that shoddy and dangerous law with a new, carefully drafted proposal …”

“This compromise does modestly improve the PATRIOT Act by strengthening civil liberties protections without sacrificing the tools that law enforcement needs to keep us safe,” Obama said as he voted to re-authorize the bill.

Asked by NOW in 2003 if he would support “legislation that eliminates all discrimination in the military based on sexual orientation,” Obama then hedged a bit. Though in many of his answers he simply affirmed “Yes,” in this one he did not.

“I would have to examine specific legislation,” he wrote, “but I would oppose policies that fail to advance equal rights in the military.”

Obama today as a presidential candidate -– giving an answer that many gay and lesbian voters no doubt approve of — has directly called for “Don’t Ask/Don’t Tell” to be repealed.

Obama changed his mind on that issue in 2004 and now supports repealing DOMA. Per Obama spokesman Bill Burton: “Obama has opposed DOMA. He felt it was a poorly conceived law and, in 2004, after hearing from gay friends who relayed to Obama how hurtful it was for the bill to be law, he supported its repeal.”

So… he hoped to repeal the Patriot Act, but then accepted an altered version; his position on Don’t Ask, Don’t Tell is basically the same; and he reversed himself completely on the Defense of Marriage Act “after hearing from gay friends” about “how hurtful it was.” DOMA, an awful bill, was passed under the Clinton administration. Hillary Clinton has also flip-flopped on it.

Not much pop here, folks…