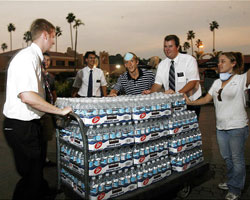 Despite his much-heralded “Mormon speech” earlier this month, Mitt Romney has avoided talking about the nitty-gritty of his Latter-day Sainthood on the campaign trail. And therein lies a strategic gaffe perhaps akin to Al Gore’s refusal in 2000 to campaign on the environment.

Sure, Mormonism may freak people out. Its rules and rituals—baptizing the dead, the funny underwear—are a bit outside the Christian mainstream for a guy who needs to woo evangelicals in Iowa. But forget for a moment the golden tablets, and consider this: Mormonism, at its most practical, is a deeply American religion—rooted in Republican Party orthodoxy and many bedrock American values.

While the Book of Mormon may tell tall tales of mythical Nephites romping around North America, LDS church doctrine, as practiced, emphasizes far more pragmatic tenets. Mormons preach such virtues as moderation, frugality, taking care of your own, giving back to the community, and avoiding dependence on the government. (They’re also known for armed resistance, too, a history that should have wide appeal to the GOP gun-nut constituency, but that’s another story.)

There’s no better place to see the manifestation of all this than in a crisis. Mormons are masters of disaster preparedness, a point that neither Romney nor his advisers have yet touted. The church’s humanitarian-services arm is an underappreciated asset that Romney has thus far failed to capitalize on as he’s contended with the charge—or suspicion—that his religion makes him too weird to be president.

Ever since 9/11, federal and state officials have been imploring Americans to stockpile some food and water and supplies in the basement, without tremendous success (if my basement is any indication). But long before the war on terror, the Mormon church was teaching its members how to prepare for the worst. As the church’s Welfare Services Handbook says, “No true Latter-day Saint, while physically or emotionally able, will voluntarily shift the burden of his own or his family’s well-being to someone else.” To that end, the church coaches members to stockpile a year’s worth of food and drinking water, along with other provisions, and most do. If terrorists or a tornado hits your neighborhood, you definitely want to be living next door to a family of Mormons.

The church’s self-reliance dogma extends beyond the average family basement to the community at large. For instance, it runs Bishop’s Storehouse Services, a network of regional warehouses that became well known during the Great Depression. When disaster strikes, church elders spring into action to distribute the goods through a welfare organization whose efficiency has been compared by some writers to the German Wehrmacht.

I grew up in Utah and have seen this phenomenon first hand. In the spring of 1983, after record levels of snow melted in the nearby mountains, City Creek flooded and threatened major parts of Salt Lake City. On a Sunday morning, as the water started to rise, the church quickly mobilized thousands of people to make sandbags to save critical parts of downtown (and, of course, the church infrastructure). We watched with amazement as the volunteers literally diverted the floodwater onto State Street, a major thoroughfare (where people later went fishing). The efforts were so successful that state officials estimated that they prevented 1,400 acres of land from flooding and $140 million in water damage.

More recently, the church went into high gear during Hurricane Katrina in a performance that put the federal government to shame. Before the storm made landfall, the LDS church in New Orleans safely evacuated all but about seven families out of about 2,500 local members, largely because the church had created an automated telephone emergency warning system that alerted all its members, instructing them to get out of town and telling them where to go.

Two days before the storm made landfall, while FEMA was floundering, the church dispatched 10 trucks full of tents, sleeping bags, tarps to cover wrecked roofs, bottled water, and 5-gallon drums of gas from its warehouses to New Orleans and other hard-hit areas. The supplies were distributed in an orderly fashion to people who desperately needed them.

Rather than downplay his religion, Mitt could spotlight the aspects of his church that reflect basic Republican values of self-sufficiency and the primacy of the private sector. After all, if disaster strikes, who will really care whether the Book of Mormon puts the Garden of Eden in Missouri? What matters is that if Romney ends up in the White House, his God will no doubt tell him to dispatch the trucks before the hurricane strikes.