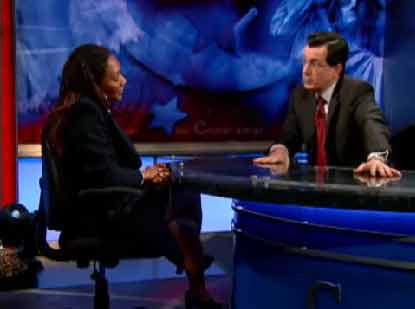 As promised, Mother Jones‘ own Debra Dickerson dropped by Stephen Colbert’s show last night, and, as usual, held her own against the onslaught of satire. Two important things came out of her appearance, I think: a) the entrance into the lexicon of “sphincter-like” as probably the best description of Bill Clinton’s recent purple-faced anti-Obama sputtering (let’s hope it catches on) and b) the fact that she may be one of a handful of people in the universe who can actually beat Mr. Colbert at his own game, getting some actual content in there with the laugh lines and even having the last word. Plus Colbert’s line about “I couldn’t get away with that with my hair” seemed a little dumb, didn’t it? Anyway, by the end he put his head down on his desk in an apparent acknowledgement of defeat.

To read all of Debra’s writing for motherjones.com, click here.

You can’t embed video from the Comedy Central website, but here’s a direct link to the segment, although it opens a new window and you have to watch a Navy Seals ad to get to it.