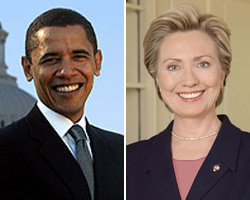 Asked if Barrack Obama was ready to be commander in chief, Hillary Clinton ducked the question. When Obama suggested she is not as willing as he is to confront the special interests of Washington, she did not engage. Offered the chance to blast Obama for vowing to meet with the dictatorial leaders of North Korea and Iran in his first year as president, she took a pass. When Clinton did go on the attack at Thursday night’s debate in Austin, Texas, she chose to focus on Obama’s use of several speech lines borrowed (or plagiarized, according to the Clinton camp) from Massachusetts Governor Deval Patrick, a supporter of Obama. That was, she said, “not change you can believe in; it’s change you can Xerox.”

With the zinger, Clinton was trying to reinforce one of her campaign’s themes: I offer solutions; he offers words. But during this portion of the debate, Obama came on strong. He brushed aside the plagiarism accusation as part of the “silly season in politics,” and noted that the fine words of his eloquent speeches convey not only hope and inspiration but also support proposals for tuition tax credits for college, tax relief for working families, and military disengagement in Iraq. And Obama explained that inspiration is essential because “if we can’t inspire the American people to get involved in their government,” Washington will continue to be a city of gridlock dominated by corporate lobbyists. Clinton didn’t have much of a reply to that. She did continue stick to her my-actions-speak-louder-than-his-words assault. But there was no new punch to this now routine line, and she appeared to gain no new ground in the battle between (his) hope and (her) experience.

Which means the debate was no game changer. Obama, who has not been his best at debates earlier in the campaign, performed well in Austin before a pumped-up crowd that cheered on both candidates. (Kudos to CNN for not shushing the candidates’ supporters.) Clinton performed well, too, especially when it came to demonstrating her command of policy details and ticking off her legislative accomplishments. But at this point, she needs to do better than well and clobber Obama, and that did not happen. A recent poll in Texas–which holds its primary on March 4–shows the race between the two a statistical dead heat. That is, Obama, if the polls are to be believed, is catching her in the crucial state. And polls in Ohio–the other big prize on March 4–show Obama nipping at a still-significant Clinton lead. But there’s still plenty of time for him to close in on her in the Buckeye State.

During the debate, there was–as in earlier encounters–far more agreement than dispute. Obama and Clinton echoed–or seconded–each other on immigration, Cuba policy, repealing George Bush’s tax cuts, adding tougher labor, safety, and environmental standards to trade deals, promoting green jobs, and withdrawing U.S. troops from Iraq. And like an old married couple, they once again bickered about their health care plans. She claimed that without a mandate forcing people to obtain health insurance, his plan would not provide universal coverage. He denied that, pointing out problems Massachusetts has had with its recent imposition of a health insurance mandate. Clinton has been arguing this same case against Obama for weeks, to no effect. And his retort this evening was sharper and better formulated than his previous responses.

It was generally one repeat after another. Clinton reiterated her campaign’s mantra: she’s ready to lead on Day One. He countered: of the two, he displayed better judgment in opposing the Iraq war. No voter who has paid any attention to the race heard much that was new. But, then, neither candidate has much that is new to say. Obama, riding a streak of wins, has no need to change his message and stock lines. And Clinton has been using all the ammo she possesses. She cites her experience, shows her smarts, throws in a dose of Democratic populism, and belittles Obama’s speechifying. In recent weeks, none of that has worked for her. But what else is there? She could turn up the volume of her attacks on him. But clearly she and her campaign chiefs had decided against appearing desperate. It didn’t even look as if her heart was in it when she poked Obama with the clever quip about Xeroxing change. A viewer could wonder if she was tired of the fight.

The debate was no showdown. There were even moments of grace and warmth, when each spoke kindly of the other–and a nice handshake occurred toward the end. At that point, both candidates came across as decent people who recognized that the campaign has forced them to be harsher than they would prefer. And in this moment, Clinton also seemed to be acknowledging that she could not attack Obama much more than she already has. Maybe she was merely fatigued. But when Clinton was asked to respond to House Speaker Nancy Pelosi’s statement that it would be a problem if superdelegates were to overturn the outcome of the primaries and the caucuses, she declined to support Pelosi’s view, noting that the rules are the rules. This was an indication that the Clinton camp has not given up considering a win-with-the-superdelegates strategy (as improbable as that might be) and a reminder that the contest could become rather ugly later on. But before any such thing can happen, Clinton will have to do rather well in Ohio and Texas.

As soon as the face-off was finished, the Clinton campaign issued a statement:

What we saw in the final moments in that debate is why Hillary Clinton is the next President of the United States. Her strength, her life experience, her compassion. She’s tested and ready. It was the moment she retook the reins of this race and showed women and men why she is the best choice.

Clinton supporters ought to hope that her spinners don’t believe their own spin, for that would be a sign they are out of touch with reality. She did not push Obama out of the saddle. She only managed to keep the same position in the horse race she held when she first took the stage.