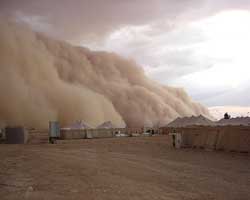 Nobel Prize-winning economist Joseph Stiglitz has blamed the Iraq war for sending the United States into a recession. On Wednesday, he told a London think tank that the war caused the credit crunch and the housing crisis that are propelling the current economic downturn. Testifying before the Senate’s Joint Economic Committee the following day, he said our involvement in Iraq has long been “weakening the American economy” and “a day of reckoning” has finally arrived.

Stiglitz’s contention that the war is causing the nation’s economic woes has become an increasingly popular meme in Democratic circles. (And a source of indignation in Republican ones. Before Stiglitz’s testimony, White House spokesman Tony Fratto said, “People like Joe Stiglitz lack the courage to consider the cost of doing nothing and the cost of failure.”) Rep. Barbara Lee (D-Calif.), a leading anti-war voice and cochair of the Congressional Progressive Caucus, is among leading Democrats who echo Stiglitz’s view. “The war is the primary reason for this recession and we have to drum that home,” she told me. Meanwhile, a coalition of progressive and anti-war groups—including MoveOn.org and Americans United for Change—announced a $20 million campaign to convince voters that the war is related to the nation’s ongoing economic troubles, an effort that is headlined by former Senator John Edwards and his wife Elizabeth.

Polls show that voters trust the Democrats over the Republicans to manage both the Iraq War and the economy, so pitching these two issues as interconnected could make political sense. The war and the economy are undoubtedly linked, but there’s a potential problem for anyone who claims the war led to a recession: Many economists say this isn’t so.

“I hate the war; I’m happy to trash it,” says Dean Baker, the codirector of the progressive-leaning Center for Economic and Policy Research. “There are lots of bad things you could say about it. It didn’t cause the recession.”

When President Bush said last week that “spending in the war might help with jobs” and that “this economy is down because we built too many houses and the economy’s adjusting,” even well-known Bush-basher Paul Krugman had to concede the point. In a blog post, he wrote, “Hate to say this, but he’s right.”

Baker also agrees with the president on the cause of the recession. “It’s the housing bubble,” he says, adding that there’s “no ambiguity.”

Desmond Lachman, an economist and resident fellow at the conservative American Enterprise Institute, says that simply removing the billions of dollars a year in Iraq spending from the economy without replacing it could actually make the recession worse, because the spending drives demand and keeps people employed. “War spending helped the U.S. get out of the Great Depression,” Lachman says.

The idea that Bush’s war is linked with Bush’s recession is obviously politically attractive for the Democrats. It’s an argument they could use with fiscal and budgetary conservatives who might normally be inclined to vote Republican.

But arguing a causal relationship could be perilous. Faiz Shakir, the research director at the Center for American Progress, which is part of the “Iraq/Recession” coalition, said the groups behind the campaign don’t intend to assert a cause-and-effect link between the war and the economy. Instead, he says, they will make the less controversial argument that the same money could be better spent at home. “We are certainly linking Iraq and the economy together, and we are talking about priorities,” he says. “All of us believe there are numerous factors that have caused the recession. The Iraq War should be considered as one small piece of what has caused the recession, however it shouldn’t be the overarching narrative of what is driving it.” Just the same, at least one of CAP’s partners in the campaign, MoveOn.org, makes explicit reference to what it calls the “Iraq recession.” And Moira Mack, a spokeswoman for the campaign, has spoken of the war and the “resulting economic downturn.”

To keep from being contradicted by otherwise friendly economists, anti-war activists ought to be careful they don’t go too far and turn arguments about spending priorities into sound bytes about cause and effect.

Photo of an approaching sandstorm in Iraq by flickr user tobo used under a Creative Commons license.