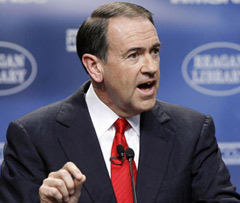 Mike Huckabee is not happy. An email sent to reporters from his campaign:

Richmond, VA — The Huckabee Presidential Campaign will be exploring all available legal options regarding the dubious final results for the state of Washington State Republican precinct caucuses, it was announced today. Campaign Chairman Ed Rollins issued the following statement:

“The Huckabee campaign is deeply disturbed by the obvious irregularities in the Washington State Republican precinct caucuses. It is very unfortunate that the Washington State Party Chairman, Luke Esser, chose to call the race for John McCain after only 87 percent of the vote was counted. According to CNN, the difference between Senator McCain and Governor Huckabee is a mere 242 votes, out of more than 12,000 votes counted-with another 1500 or so votes, apparently, not counted. That is an outrage.

“In other words, more than one in eight Evergreen State Republicans have been disenfranchised by the actions of their own party. This was an error in judgment by Mr. Esser. It was Mr. Esser’s duty to oversee a fair vote-count process. Washington Republicans know, from bitter experience in the 2004 gubernatorial election, the terrible results that can come from bad ballot-counting.

“Frankly, I am disappointed in the way that Mr. Esser has handled this urgent matter. So I call upon Mr. Esser and his colleagues to cooperate fully with the Huckabee campaign-and all Republicans, everywhere, who care about honest and transparent vote-counting-to make sure that every vote is counted and that all Republicans in Washington have the chance to make their votes count. Attempts by our campaign to contact Mr. Esser have been unsuccessful. Our lawyers will be on the ground in Washington State soon, and we look forward to sitting down with Mr. Esser to evaluate this process, to see why the count took so long, and why the vote-counting was stopped prematurely.

“It would be a disservice to every voter in Washington State to not pursue a full accounting of all votes cast.

“This is not about Mike Huckabee. This is not about Senator John McCain. This is about the failings of the Washington State Republican Party. All Republicans should unite to demand an honest accounting of the votes, so that Republicans can have full confidence in the results, and full confidence in the eventual Republican nominee. As I said, we are prepared to go to court, and we are also prepared to take our case all the way to the Republican National Convention in September.

“Our cause is just. We must reemphasize the sacred American principle that all ballots be counted in a free, fair, and transparent manner.”