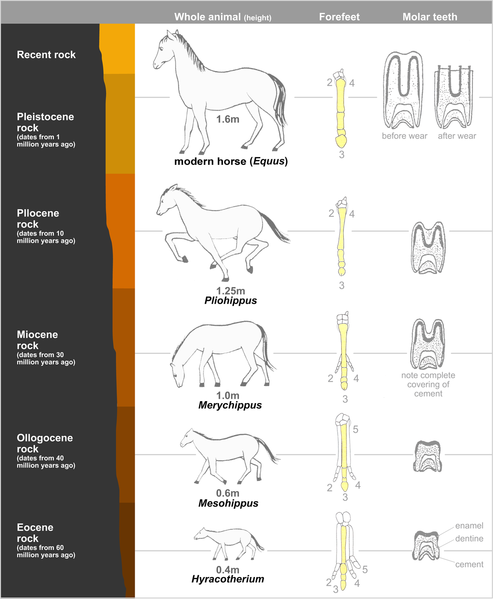 At least not since 1861, when the first Archaeopteryx fossil bridging birds and dinosaurs was discovered. Creationists have got it wrong (again), according to a new piece in New Scientist. Archaeopteryx rose from German limestones only 2 years after Darwin published The Origin of Species, wherein he predicted that so-called missing-links would be found. And they were. And they are, writes Donald Prothero:

In the 1870s the iconic sequence of fossil horses was documented. By the time of Darwin’s death in 1882 there were numerous fossils and fossil sequences showing evolutionary change, especially among invertebrates. Evidence of evolution in the fossil record has vastly increased since then. Yet the idea still persists that the fossil record is too patchy to provide good evidence of evolution. One reason for this is the influence of creationism. Foremost among their tactics is to distort or ignore the evidence for evolution; a favourite lie is “there are no transitional fossils”.

In fact transitions are everywhere: the emergence of vertebrates from echinoderms (sea urchins, starfish & kin); the “fishibian” sequence (pdf) whereby fish crawled ashore; the transition from synapsids to mammals; plus sequences showing how giraffes got their long necks, seals returned to the sea; and the hippolike transition that returned manatees and their kin back to the ocean… The list is growing, deepening, and, well, evolving.

Meanwhile, Jeff Hecht at Short Sharp Science reports that Answers in Genesis, the organization behind the notorious Creation Museum, complete with Adam and even mannequins, has published the Answers Research Journal for—pardon the oxymorons—peer-reviewed creationist science research.

Finally, the news that the Mt. Blanco Fossil Museum in Texas, which claims that Noah took dinos on his ark, is being forced to sell its prehistoric mastodon skull to save the museum from extinction… Chock one up for Chuck. Darwin, that is.