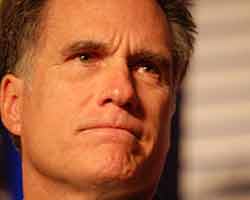 At the Conservative Political Action Conference (CPAC), where a speech by Vice President Dick Cheney on Thursday was greeted with chants of “four more years,” John McCain was in enemy territory. Many of the right-wing activists who gathered for the annual event scornfully regard the Arizona senator as a false conservative, one who first opposed President Bush’s tax cuts and who has too often dared to team up with Democrats in Congress to promote legislation that drives conservatives crazy, including campaign finance and immigration reform.

As attendees milled about the Omni Shoreham Hotel in Washington D.C., waiting for speeches by McCain and Mitt Romney, the enthusiasm for the former Massachusetts governor was evident. He was supposed to be the man of the hour. Young men inflated Mitt Romney thunder sticks. Volunteers handed out hundreds of giant foam mitts (get it?). No one realized that the media was reporting that Romney was planning to announce during his speech his departure from the presidential race and that, like it or not, they were about to be stuck with John McCain.

When conservative talk show host Laura Ingraham introduced Romney, she hurled a barb or two at McCain, and the crowd ate it up. “It’s not enough to say you were a foot soldier in the Reagan Revolution,” said Ingraham, referencing one of McCain’s common lines. The real question is, she said, “What have you done for conservatism lately?”

Romney took the stage to a standing ovation and cheers of “We want Mitt!” As he worked through his stump speech’s list of campaign promises–supporting tax cuts, fewer government regulations, a larger military–there was no indication he was giving a concession speech. In fact, he made more than one reference to taking his campaign to the convention. The crowd was in a frenzy.

And then Romney blindsided his fans. “If I fight on in my campaign, all the way to the convention, I would forestall the launch of a national campaign and make it more likely that Senator Clinton or Obama would win,” he said, as the crowd grew silent. “And in this time of war, I simply cannot let my campaign be a part of aiding a surrender to terror.” As it slowly dawned on the committed Mittens that he was dropping out, jeers and shouts of “No!” rose from the audience. Romney smiled sadly and assured them it was true.

Afterward, Romney partisans filed out of the ballroom in a state of shock. “I’m stunned,” said Chris Cummings, who had a Romney sign tucked under his arm. “My jaw hit the floor when he said he was pulling out.” Cummings said McCain has always “irked him the wrong way,” but if it comes to Barack Obama or Hillary Clinton versus McCain, he said he will toe the party line but he won’t be “ecstatic about it.”

Others were in a less conciliatory mood. “I understand why he did what he did,” supporter Ryan Hayden said of Romney. “He was putting a lot of his own money into the campaign. It was time for him to pull out. But that does not change my feelings on John McCain. I will not vote for him. I will sit this one out.”

Romney’s Washington D.C. chairwoman, Betsy Werronen, said she was “heartbroken.” She noted that phone banking was still underway at the local Romney headquarters as we spoke. She told me she had to the leave the conference in order to tell the volunteers to stop cold-calling.

In the lobby, “Flip Romney,” a guy in a giant dolphin suit who has been following Romney around the country reminding people of the ex-governor’s flip-flops on key issues, jumped up and down and clapped his flippers above his head. A reporter on the scene turned to his cameraman and said, “Get the clapping dolphin.” At one point, an emotional Romney staffer walked past Flip. I mentioned that it looked like the young man was about to cry. “If I could get some salt water, that’d be really nice,” the giant dolphin replied.

A few hours after Romney disappointed CPAC, a triumphant McCain took the stage. He was greeted by cheers and a few boos. Before Romney had made the day’s news by dropping out, McCain, the frontrunner, had planned to come to the conference to start courting the conservative wing of his party—that is, to counter the anti-McCain crusade that has been mounted by Rush Limbaugh, Ann Coulter, Laura Ingraham, Michelle Malkin, James Dobson, and other conservative influentials. His mission today was to convince this crowd he is indeed a true conservative. And now, with Romney out, he and the conservatives before him were essentially considering how to make the best of a forced marriage.

McCain repeatedly stressed that he understood why the audience of hardcore Republicans were wary of him, and that he did not begrudge them for holding different views from his on many issues. But, he said, he always started with “conservative principles,” the same conservative principles espoused by the crowd’s god-hero, Ronald Reagan. “My record in public office taken as a whole,” McCain said, “is the record of a mainstream conservative.”

The crowd was polite, and only booed loudly when McCain brought up immigration. It helped that McCain repeatedly bashed the Democrats–implicitly making the point that Republicans didn’t have to really like him, they just had to hate the Democrats more. On the major conservative issues, McCain maintained, he is a committed conservative: national security, abortion, and spending. He added that he would veto any expansion of “entitlement programs.” That vow was a crowd pleaser.

After the speech, the Romney supporters in the crowd appeared more conciliatory toward McCain. A young man named Chris Geissler, who had supported Romney’s political aspirations ever since the Salt Lake City Olympics in 2002, said that he was “disappointed” and that he would definitely vote for McCain if Romney is his choice for vice president. If not, “I’d be seriously hesitant to vote for McCain, but if it’s a conservative V.P. other than Romney, he’ll probably get my vote.”

“We were sad to see Governor Romney drop out,” said Curt Luidhardt, an attendee from Indiana, standing next to his wife. He said he was coming around on McCain. “John McCain will probably be a good nominee for us. He’ll do something that President Bush hasn’t done, which is shrink the government. And he’ll prosecute the war with some seriousness.” He paused and said, “I’ll vote for that.”