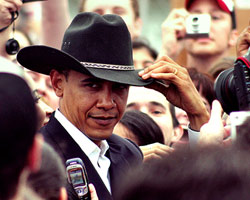 Hillary Clinton’s plan to use Texas as a firewall against Barack Obama’s momentum may be the biggest mistake of her campaign. In fact, the quirky structure of the Texas election so heavily favors Obama that he may able to lose the popular vote next Tuesday and still win the delegate count, a fact that the Clinton campaign should have realized well before it started treating Texas as its last stand.

On Tuesday, the state will award 193 delegates, 126 of them through a primary and 67 by way of a caucus that begins minutes after the polls close.

The delegates are distributed among the state’s 31 state Senate districts, but not according to size or population. Instead, they are divvied up based on the Democratic turnout in each district in the last two statewide elections. Designed to reward voter participation, the system awards a larger number of delegates (as many as eight) to districts that saw large Democratic turnouts in 2004 and 2006, and fewer (two or three, in some cases) to those that didn’t.

This system does not work to Clinton’s advantage, because the delegate-rich districts largely favor Obama while the delegate-poor ones trend toward Clinton. In the 2004 presidential election, half of the state’s Latinos voted for George W. Bush, their former governor, who had a longstanding relationship with the Latino community in Texas. In 2006, when Republican Governor Rick Perry ran for reelection, the Latino vote splintered among Perry, then-Democratic Congressman Chris Bell, and two independents. According to Republican pollster Mike Baselice, Perry took 36 percent of the Latino vote, while Bell took just 35 percent. Had Latinos voted in large numbers for John Kerry (in 2004) and Bell (in 2006), delegate counts in Latino-heavy districts that are anticipated to support Clinton on Tuesday would be higher.

Compounding the problem for the Clinton campaign is that Bell, the Democratic gubernatorial nominee in 2006, was at the time the Congressional Representative from Houston. As a result, the city turned out a large number of Democrats for that election, meaning that state Senate District 13, which contains Houston, gets seven delegates this time around. The city is home to one of the state’s largest black communities and one of only two African-American senators in the statehouse. That state senator, Rodney Ellis, has endorsed Obama and delegate-rich Houston is expected to turn out strongly for the Illinois senator.

Other delegate-rich areas include Austin and Dallas. State Senate district 14, which includes the liberal college town of Austin, has eight delegates. Students and well-educated adults make up Obama’s core constituencies, so the city represents fertile ground for him.

Dallas, on the other hand, is less of a sure thing. The Clinton-friendly Latino community there is larger than the Obama-friendly black community. But African-American State Senator Royce West is from Dallas, and he has endorsed Obama.

Meanwhile, the Latino-heavy districts 19, 20, 21, and 27, collectively covering a huge swath of the southwestern part of the state along the Mexico border, each have four or fewer delegates. According to Austin-based political consultant Leland Beatty, Latinos have traditionally made up 75 percent of the electorate in Democratic primaries in these districts. But despite Clinton’s anticipated success in these parts, she will have to outperform even the most optimistic expectations for any of the districts to distribute their delegates three-to-one instead of two-to-two. (For more on the Texas delegate breakdown, see the excellent work of Texas-based blog Burnt Orange Report.)

The bottom line: The Latino-heavy parts of Texas that will likely favor Clinton are comprised of districts with few delegates, often between two and four, while many of the areas Obama is targeting are districts with five to eight delegates. On Tuesday night, if trends established in earlier primaries hold and Obama draws support from college students, well-educated voters, and black voters, while Clinton pockets low-income whites and Latinos, Obama could walk away with a delegate lead regardless of the popular vote.

And then there is the caucus at the end of the night. Working-class voters that have (at least until recently) been one of Clinton’s blocs may not have the time to vote during the day and return in the evening to caucus. Critics of the caucus system have traditionally pointed to the fact that it favors the wealthy: voters who are politically sophisticated and able to bend their schedules to participate in a time-consuming event. In Texas, caucus attendees must have voted in the primary. So caucuses there are decided by voters who can find time to do both. (The problem is mitigated somewhat because Texas allows voters to cast their ballots early—since February 19 in this case. Early voting is pointing to a record turnout.)

To date, Obama has done exceedingly well in caucuses for a number of reasons: his supporters are more upscale than Clinton’s; they are often more energized than hers; and the Clinton campaign has neglected to invest heavily in caucus states. All told, it’s likely that Obama will net a substantial majority of the 67 delegates awarded through the caucus on Tuesday night.

In Texas, both the primary and the caucus are open to independents and Republicans, which also gives Obama the edge, since those voters have tended to favor him over Clinton. Mix together Obama’s potential with independent and Republican voters, the quirky distribution of delegates, and the post-voting caucus, and you’ve got a situation in Texas that’s working to Obama’s advantage—and looking more and more like Clinton’s Alamo.