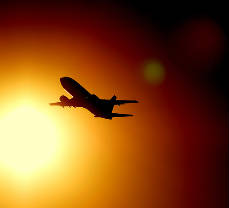 Today, two of the world’s largest aircraft manufacturers played nice for the camera at the third annual Aviation & Environment Summit in Geneva, Switzerland. Boeing president and CEO Scott Carson and Tom Enders, his Airbus counterpart, signed a document pledging their companies’ to work together to enlist the help of the U.S. and various European governments to reduce air travel’s carbon emissions. This would primarily be accomplished, say the executives, through modernization of air traffic management systems.

The move is not altogether surprising, given that the price of oil now hovers around $117 per barrel—higher for airlines, which rely on more costly jet fuel. The aviation business is scrambling to improve efficiency (translation: cut costs) by whatever means necessary. (Just consider that the fact that a mixed drink in flight now costs five bucks—exact change, please!—and that five leading airlines now plan to charge passengers twenty-five dollars for a second checked bag.)

The Boeing/Airbus agreement, if successful in modernizing air traffic management systems, could reduce carbon emissions by 10-12 percent in Europe alone, according to Agence France-Presse. “We set a good example and hopefully it will be exportable on how to organize air traffic management,” says Enders.

Although the Boeing/Airbus announcement has gotten more press attention, the Geneva summit itself also led to noteworthy environmental pledges from the world’s leading aviation organizations. From Agence France-Presse:

Both Airbus and Boeing also joined other industry leaders, including the head of international airline body IATA at the summit, to sign a declaration to adopt several strategies against pollution.

The declaration signed by 13 organisations acknowledged that the industry has a responsibility for the environment.

The declaration commits the industry to the development and application of new technologies, to fuel efficiency, improvement of air routes, traffic management and airport infrastructure.

The signatories also committed themselves to a reduction of gas emissions.

In addition, the declaration urges governments to support and co-finance research and development, and to develop a framework for global management of emissions under the International Civil Aviation Organization.

The measures mentioned above also form the core of the International Air Transport Association’s goal of making the industry 25 percent more fuel efficient by 2020 and carbon neutral by 2050.

(To read my recent piece about Boeing and Virgin Atlantic’s attempts to power a commercial jet with sustainable biofuels, click here.)

Photo used under a Creative Commons license from Cubbie_n_Vegas*.