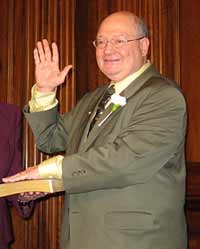 The hysterical reaction in Congress to Jimmy Carter’s trip to the Middle East, where he met with a Hamas leader today, is precisely the sort of thing I hope the new “pro-Israel, pro-peace” group J Street speaks out against. This week Rep. Sue Myrick (R-NC) said she wants to revoke Carter’s passport. And Rep. Joseph Knollenberg (R-MI) introduced the Coordinated American Response to Extreme Radicals Act (CARTER) Act to cut all federal funding to the Carter Center at Emory University. That’s the organization that pours resources into humanitarian projects like eradicating the Guinea worm parasite in Africa and was lauded in Carter’s 2002 Nobel Peace Prize citation.

New York Democratic representative Gary Ackerman came out against the CARTER Act, but, in the process, managed to be just as petty and juvenile as his Republican colleagues. As the New York Sun reported today:

“The man is entitled his idiotic, moronic, nonsensical, anti-commonsensical, foolish opinions. And all that being said, he is still entitled to have them. I don’t think we should be cutting off funding for any ex presidents to do things. We didn’t cut off Richard Nixon,” he said. Mr. Ackerman added that if Mr. Carter came to his home for the Passover Seder, he would ask him to read the part of the simple son, the boy who does not know enough to even ask a question about the story of the Jewish exodus from ancient Egypt.

Shouldn’t the Democratic leadership be bothered by this kind of rhetoric directed against a former president of their own party? More important, would Ackerman slap his offensive “simple son” label on Colin Powell or Brent Scowcroft or Zbigniew Brzezinski or Lee Hamilton or Shlomo Ben-Ami, all of whom have called for engagement with Hamas. And what about the 64 percent of actual Israelis who favor direct talks with Hamas?