Go ahead, tell the people of Myanmar that global-warming-related superstorms aren’t anything to worry about. That 100,000-plus aren’t dead and 95% of the buildings in the path of Cyclone Nargis aren’t demolished. These images from the European Space Agency’s Envisat satellite, taken a year apart, show the extent of the flooding. Envisat’s radar cut through the clouds to reveal critical Near Real Time situation on the ground. The image on the left (above) is from a year ago. The image on the right shows flooding (black areas) two days after the cyclone’s passage. Accuweather reported Nargis made landfall with sustained winds of 130 mph and gusts of 150-160 mph—ramping up with frightening speed from a Category 1 to a strong Category 3 or minimal Category 4 hurricane at landfall. Not as big as they get, but combined with an 11.5-foot storm surge, about as deadly as they get. 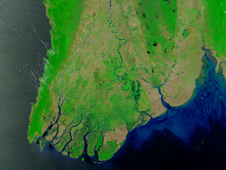 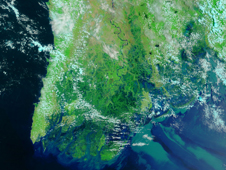 NASA’s color images from the Moderate Resolution Imaging Spectroradiometer (MODIS) on its Terra satellite use a combination of visible and infrared light to highlight floodwaters. Water appears blue or nearly black, vegetation bright green, bare ground tan, and clouds white or light blue. The image on the left is from approximately a month before the cyclone. In the May 5 image on the right, the entire coastal plain is flooded. Fallow agricultural areas have been especially hard hit. Yangôn, with a population of over 4 million, is surrounded by floods. Several large cities, with populations between 100,000–500,000, are also inundated. Muddy runoff colors the Gulf of Martaban turquoise. 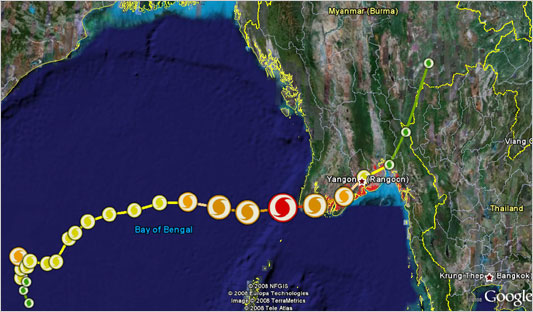 The Google Lat Long Blog put together images with Naval Research Lab data showing the path of the storm (above), plus a downloadable version with interactive features.

Meanwhile, Agence France Press reports that one of the most respected voices in the climate field, MIT meteorologist Kerry Emanuel, calculates the power of tropical cyclones has roughly doubled since the 1950s.