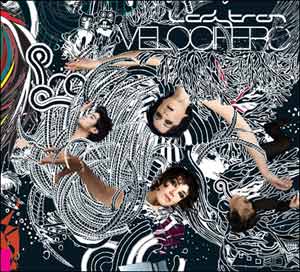 Ladytron have always been kind of sneaky. They’re better than they should be, with a far-from-unique formula of vaguely out-of-date electronica and breathy female vocals, plus a name that seems culled from Barbarella or something. Yet each of the foursome’s three albums so far, starting with their 2001 debut, 604, has risen above generic retro-futurism or pretentious glam-techno, utilizing a diverse stylistic palette as well as an wry playfulness (witness their cover of Tweet’s “Oops (Oh My)”). Plus, they just write really good, catchy songs: “Seventeen,” “Destroy Everything You Touch,” and “Playgirl” could all take on the best Depeche Mode songs in an electro battle of the bands. Most intriguingly, they seem to have gotten better with every album; does Velocifero, out next month, continue the Tron’s evolution?

Sorry for the copout, but yes and no. Let’s start with the cover: it’s their most colorful and organic to date (do I see yellow and purple over there?), but oddly enough, the music seems more industrial and harsh than usual, perhaps as a result of the production help from Alessandro Cortini, who has helped out Nine Inch Nails in the past. Opener “Black Cat” indulges in over two minutes of Front 242-style drums and dramatic synths before getting to the vocals, which turn out to be in Bulgarian. Seriously. My Russian skills let me catch phrases here and there: did they just sing about a murdered secretary? I know, this sounds like a parody of a Ladytron song, but while it’s not exactly “catchy,” it’s strangely appealing.

Thankfully, there are more accessible moments, like the swing tempo “Ghosts” (“There’s a ghost in me/who wants to say ‘I’m sorry'”) and the oddly Raveonettes-reminscent “Runaway.” Unfortunately, six of the album’s 13 tracks that have the stomping, “boom-boom-chick” beat, and while some of them, like “Burning Up,” are hypnotic and intense, the style feels like Ladytron Default Mode, and “They Gave You A Heart, They Gave You A Name” is an awkward misfire. Even the admirable attempt at what seems like a ballad sung to a computer (“Deep Blue/I wanna give it all to you”) doesn’t take off.

While the rock intensity on Velocifero is an interesting, and admirable, development for Ladytron, the songwriting seems a little aimless, and there are some good songs, but nothing as transcendent as any of the three earlier singles I mentioned above. Perhaps the Tron’s more goth-industrial fans will appreciate the harder edges without worrying too much about whether they’ll remember the songs in the morning. But to me, Velocifero seems more like a step to the left than a step forward, and really, they could have set their sights much higher.

Velocifero is out June 3 on Nettwerk. The whole album is streaming at their MySpace page here.