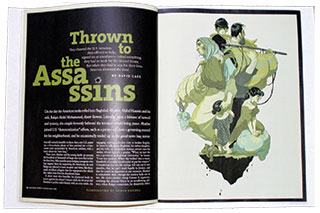 
in our march/april 2007 issue, David Case wrote about a Baghdad couple who fled home, like more than 2 million other Iraqis, and became stranded in Casablanca-like limbo in Jordan. Having put their lives at risk by working as translators for the American military, they pleaded with the US Embassy for help, to no avail. For Abather Abdul Hussein and Balqes Abdel Mohammed, the story has a happy ending: After our piece ran, the unhcr reconsidered their application for refugee status, and in October they landed in Miami. “The Mother Jones article helped very much in convincing unhcr,” Balqes says. However, her 19-year-old son remains stuck in a bureaucratic holding pattern in Syria. So far, fewer than 5,000 Iraqi refugees have been admitted to the United States.

Abather Abdul Hussein had just arrived at John Wayne International Airport in Orange County, California. Already, he couldn’t believe his eyes.
The sign read, “Car pools only.” Could it be? Cars with pools?

Abather is an easygoing Iraqi with a lively sense of humor, but he’s no one’s fool. He holds a master’s in engineering, and was savvy enough to rescue his young family from Baghdad, to keep them alive and sane as illegal refugees in Jordan.

Yet since the day that he and his wife, Balqes Abdel Mohammed, threw flowers at victorious US troops rolling into Baghdad, he’s been through so much that almost anything about America could seem believable. Even cars with pools. They were certainly large enough.

He couldn’t contain his curiosity: “I told the driver, ‘Hey, do you have here in America cars with swimming pools?'”

Abather first appeared in Mother Jones‘ April 2007 feature “Thrown to the Assassins.” The story chronicled how he and his wife befriended American troops, but were later targeted by assassins for accepting US contracts. Abather had been kidnapped, tied up, and beaten by insurgents. They packed him in a BMW and intended to kill him, but he narrowly escaped with his life after the car crashed in a high-speed chase. For many months, Abather appealed to the US, the United Nations, and others to relocate his family. His old friends in the US military vouched for him and wrote letters. But the millions of Iraqis who had been displaced did not fit the Bush administration’s narrative on the war. There were very few visas, even for contractors and translators whose lives were threatened because of their association with the US.

Abather’s was ignored until he presented the Mother Jones article to the UN High Commission for Refugees. Then he was called in for a six-hour interview with American security officials. Several months later, the family was instructed to complete medical exams. And finally, in late 2007, they received visas and plane tickets to come to the US.

Unfortunately, the family’s ordeal is not over yet. Before she met Abather, Balqes had another husband, who was killed in the Iran-Iraq war. Her 19-year-old son from that marriage, Al Hakam, is stuck in Syria, due to a bureaucratic hairball. His immigration file is in Jordan, but he cannot travel there. The Jordanian government has barred young Iraqi men from entering ever since terrorists struck Amman hotels in 2005. Meanwhile, if his file is transferred to Syria, officials tell Balqes that he will have to go to the end of the line. Meanwhile, she says, “my son can’t eat; he can’t sleep. He is alone, and has been threatened by Baathists in Syria.”

As for the rest of the family, “we are very grateful to be here, to be safe,” Balqes says. For the most part, they are enjoying life in America. They have obtained driver’s licenses, social security cards, and other documents of American life, and the speed and efficiency with which they received these impressed them, especially compared to the visa process.

Balqes, formerly a professor in Baghdad, is taking classes to improve her English, and Abather hopes to do the same when they can afford it. Meanwhile, they practice by talking to anyone, at bus stops, on the street, anywhere. They find Americans eager to meet Iraqis and curious to hear them talk about the war. “They ask us, ‘Do the Iraqis really want the US there?'” Balqes says.

As they expected, there’s nothing easy about getting started in
America. They receive a small stipend (from the US government), but it’s not enough to pay their modest rent. Iraqi contacts in LA helped Abather land a job at a gas station two nights a week, but even that doesn’t help much. Nor is it an ideal job for someone with a master’s degree. “As my Iraqi friends tell me, this is paying the tax” for getting started in America, he says. He hopes to save enough to buy a cheap car, but LA’s freeways are daunting to a newcomer—even without people swimming laps in the back of their Ford Expeditions. “This is a country of laws,” he says. “If you make any mistake, they will stop you and give you ticket, $300. I can’t afford that.”

Despite losing his home and narrowly surviving, Abather still musters a positive attitude toward the US. “I am very thanks to your country,” he says.