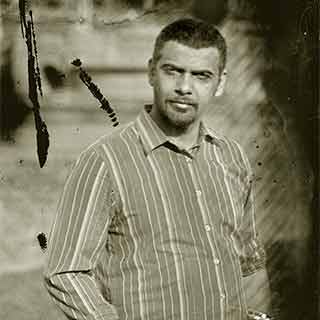 In 1998, 20-year-old Raed Jarrar watched from the roof of his family’s home in Baghdad as American Tomahawk cruise missiles struck government buildings close by, blowing out the windows and sending him scrambling for cover. Five years later, during Operation Iraqi Freedom, coalition planes targeted the same buildings, as well as the nearby airport and Saddam Hussein’s palace, killing and wounding dozens of people from Jarrar’s middle-class neighborhood.

This year, Jarrar quietly celebrated his 30th birthday outside Pasadena at a retreat he was attending for his job as a consultant for the American Friends Service Committee. He now lives in Washington, D.C., a short metro ride away from the White House, the Pentagon, and the various think tanks where his country’s future has been decided for much of his life. Yet Jarrar’s become something the war’s planners did not anticipate: an Iraqi who’s thwarted their efforts by using the tools of American democracy. Through a peculiar roll of history’s dice, the young exile has helped throw a monkey wrench in the Bush administration’s attempts to lay the groundwork for a permanent American presence in Iraq. “I’m just another small example of how Iraqis would rather end the occupation through talking to U.S. legislators and the public,” Jarrar explains.

Jarrar was born in Baghdad, the son of a Shiite mother and a Sunni father, and the oldest of three boys. He attended the University of Baghdad and began graduate school in Amman, Jordan, where he studied architecture, focusing on postwar reconstruction. As the world’s eyes turned to Iraq in late 2002, a friend and fellow architect who went by the nickname “Salam Pax” started an English-language blog. Because he often had trouble reaching Jarrar, he named it “Where Is Raed?” Jarrar started blogging there as well, and to the friends’ surprise, their musings on stockpiling food and the gyrating value of the dinar were read by people all over the world looking for a glimpse of the final days of Saddam Hussein’s Iraq.

After the American invasion, Jarrar started an ngo named Emaar (“Reconstruction”) to support Iraqis trying to rebuild their neighborhoods. His blog posts began to reflect his growing anger at the occupation. “American foreign policy is putting people like me in a very weak position,” he wrote in March 2004. “In extreme circumstances, extreme ideologies rule and dominate. And I am, unfortunately, not an extremist.”

While traveling in southern Iraq, Jarrar was kidnapped by a militia; he was released unharmed after a few hours. With normal life in Iraq becoming “impossible,” he decided to return to Jordan to complete his master’s degree. In Amman, he met and became engaged to an Iranian American woman. In September 2005, Jarrar arrived in the United States and made plans to become a permanent resident.

That summer, George W. Bush had assured Iraqis and Americans that the United States would stay in Iraq “as long as we are needed, and not a day longer.” But Jarrar—like many Iraqis—suspected that the administration had other ideas. After witnessing Iraq’s descent into violence, he became convinced that the only solution was for the United States to leave as soon as possible. “Only a complete U.S. withdrawal that leaves no troops, bases, or private contractors behind would create the safe space for Iraqis to deal with their problems and heal their wounds,” he says. “Iraqis will never be capable of starting the process of reconciliation and reconstruction with a foreign occupation taking sides.”

Five years on, American forces remain in Iraq under a United Nations mandate subject to annual renewal by the Security Council. Last June, Iraq’s parliament, asserting its constitutional duty to ratify treaties, passed a law requiring its approval of future extensions of the mandate. But the UN and Iraqi president Nouri al-Maliki, under pressure from the United States, have ignored the MPs. Late last year the mandate was renewed until the end of 2008 without parliamentary approval.

In the meantime, the Bush administration has tried to bypass the UN altogether. In late November 2007, Maliki and Bush quietly signed a Declaration of Principles that outlined the United States’ ongoing political and military relationship with Iraq, including its commitment to “defending [Iraq’s] democratic system against internal and external threats.”

In the many countries where its troops are based, the United States maintains Status of Forces Agreements, or sofas, which may be signed by the president without congressional approval. But until now, only treaties, which require Senate ratification, have authorized the use of force by American troops in host countries. No sofa has given American troops the leeway implied in the Declaration of Principles. The administration “does not want this to go to Congress,” explains former assistant secretary of defense Lawrence Korb, now a senior fellow at the Center for American Progress. “They’d never get the votes.”

That’s where Jarrar stepped in. He had already spent months trying to get members of Congress to make contact with Iraqi members of parliament who opposed extending the UN mandate. (More than half of Iraqi MPs have called for the United States to set a timetable for withdrawal.) Shortly after the Bush-Maliki agreement was signed, Jarrar was introduced to Caleb Rossiter, an aide to Rep. Bill Delahunt (D-Mass.), chairman of the House Subcommittee on International Organizations, Human Rights, and Oversight. In Jarrar, Rossiter recognized a unique resource. Just as Arabic-speaking American officials are a rarity in Baghdad, so too are Iraqi anti-war activists in Washington who speak fluent English and can navigate the intricacies of the Iraqi government.

Rossiter took the issue to Delahunt, who has since held more than five hearings on the legality of the Bush administration’s plans for Iraq. Jarrar testified at the first hearing and is now helping Delahunt bring a handful of Iraqi MPs to the States to meet their counterparts and discuss their shared oversight role. As Rossiter explains, “Never underestimate the bonding power of legislators learning they’re both being constitutionally insulted by the same people in the same way.”

Testifying before the House Armed Services Committee in February, Secretary of Defense Robert Gates backpedaled on the Declaration of Principles, stating it was “not considered by our government to be a security commitment.” Gates also suggested that any future security agreements with Iraq would be subject to congressional review, although the White House is intent on finalizing its agreement with Maliki before the end of Bush’s term.

Rossiter credits Jarrar for tipping off Congress to a situation that the administration was not eager to publicize. “Without Jarrar, who knows where we’d be,” he says. “He’s been crucial in helping us think through our inquiry into this. What makes him so valuable is he understands the coin of the realm on Capitol Hill is good information. We know from experience that we can count on anything he brings us.” Congressman Delahunt concurs. “Raed’s been simply invaluable,” he says. “There’s so much about Iraq we can miss: the domestic political forces, the diversity of the society. He’s given us outstanding objective analysis on all of it.”

The secret of Jarrar’s success may be that unlike most people walking the halls of Congress, he never wanted to be there in the first place. He’d rather be back in Baghdad, putting his training rebuilding cities to use.

“I still sometimes dream that there will be opportunities after the war, like in Chicago after the great fire,” he says. “But I’m not an architect now. I didn’t have the privilege to decide that. What decided were the bombs that fell on my neighborhood.”