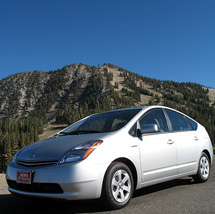 My parents just bought a Prius in Northern California. They reported incredible difficulties in the process — most dealerships had long waiting lists with all sorts of onerous conditions, and those that didn’t would sell their available cars within a few hours of putting them on the lot. They finally found a car four hours from their house, and snapped it up the moment they saw it.

Apparently the desperation for a car that gets 50 miles to the gallon extends beyond my parents and their latte-sipping neighbors. Prius-mania is striking Montana, where SUVs are getting retired by the batch and eco- and mileage-friendly cars are taking their place. From the Missoulian:

The largest car and truck auction yard in the Northwest sits just on the south side of the Yellowstone River near Billings. If you’re looking to see how $4-a-gallon gas is putting the hurt on Montana, this is a good place to start.

Big, gas-guzzling SUVs are sitting around for weeks, said Jake Gertsch, a salesman at Auto Auction of Montana. Cars are in short supply and they cost more. There’s not a Toyota Prius hybrid in sight.

According to the article, a Billings Toyota dealership has seen its Prius waiting list double in length in recent weeks and SUVs don’t even get sold as used cars anymore. They’re sent straight to the auction block.

So let’s applaud the spread of the Prius appeal — the hybrid has to break out of fashionable but stigmatized enclaves like Northern California and, uh, Southern California if it is going to make a dent in America’s nationwide emissions production. But let’s not pretend that the market is working to save the planet here. Yes, as gas prices go up more hybrids are being purchased, which will in turn spur more production. But the market moves much slower than our understanding of global warming (which in turn moves slower than global warming itself). If we wait for the market to force wholesale changes in our energy usage, as we have with cars, we’re going to make the changes necessary to save this planet decades too late.