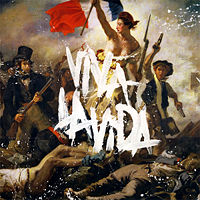 Well, we’ve mocked and dissed, and also grudgingly acknowledged their success, but time keeps on slipping into the future, and now the new Coldplay album, Viva La Vida or Death and All His Friends, is finally set for release tomorrow in the US (after going platinum in the UK in just three days). So, how is the thing itself? Well, reviews are decidedly mixed: Aidin Vaziri over at the San Francisco Chronicle can barely contain himself, calling it “amazing,” an “avalanche of brilliant, life-affirming music.” Golly. On the other hand, Pitchfork, unsurprisingly, is slightly more sober, giving the album 6.5 awesome hipster points out of 10, acknowledging the band’s attempt at an “‘experimental’ mid-career maneuver” but calling it “diluted,” adding lead singer Chris Martin “is still a hopeless sap.” Awww. The LA Times gives it three stars, but tries to make excuses:

Have you ever picked up a self-help book from the display table in a big-box bookstore and opened it to find a phrase that exactly applied to your life? The most pedestrian insight can sometimes hit surprisingly hard. Banality might not elevate the intellect, but it helps in a tired, over-wired culture. We’re all so distracted that we need to be reminded of the obvious, again and again.

We do? Okay, sure, I’m the first to admit I’m bumbling through life making the same mistakes over and over again like a cartoon coyote hitting himself on the head with a bat, but does that mean I need Chris Martin proclaiming he’ll try to fix me?

After the jump: Martin walks out of a BBC interview!

Speaking of headaches, Martin was apparently feeling a little grumpy lately, as he walked out of an interview on BBC Radio 4 last Thursday. A few minutes into the piece, interviewer John Wilson asked what appeared to be an innocuous question about morbid themes on an album that has the word “death” in the title, and Martin answered by accusing Wilson of “journalistically twisting me into something I don’t really mean,” finally pronouncing “I’m not really enjoying this” a few minutes later and walking out of the studio. “Have I upset him?” the hapless interviewer asked. Martin returned after a break but gave only mumbling, one-word answers to questions. Viva la vida, indeed.

And what, pray tell, does your intrepid contributor with the dumb DJ name think about the album? Well, first of all, Vida was produced by Brian Eno, and I’d listen to that guy produce Nickelback. The sound here has the same cinematic sheen as the esteemed producer’s work for U2, which is good and bad: “Lovers in Japan,” with its reverbing, warping guitar note laid over the top of the song like a blanket, just makes me want to pull out Achtung Baby. I’ve already written about “Violet Hill’s” turgid stomp and lyrical banalities, but the title track (the one on the iPod commercial) isn’t so bad: it’s almost dance music, although it has the easy emotion of a Hallmark card. The album’s best moment, “Yes!/Chinese Sleep Chant,” pushes Martin’s voice down into an almost unrecognizably low register, and the song’s Eastern melodies and quick time-signature switches are nice. But even the swirling instrumental coda seems half-hearted and overly familiar. It’s like dropping apples to check out gravity: a good experiment, sure, but at this point most scientists have moved on to string theory.

Viva La Vida or Death and All His Friends is out Tuesday on Capitol.