There hasn’t yet been a tin or copper war, but there once was a nitrate war, and in the past decade Bolivia has seen both a water war and a gas war—the latest struggles over the nation’s only real riches, the lucrative resources granted by God and geology. In this country nearly twice the size of France, where Amazonian jungles butt against 12,000-foot plateaus, the winners have always come from elsewhere. The Inca royalty of Cuzco (in modern-day Peru) took power from the local Aymara; the Spanish took gold and silver; the British took tin; recently, multinationals Bechtel and Suez tried to privatize the water supplies of Cochabamba and El Alto, while other foreign companies fought for control of Bolivia’s prodigious supply of natural gas; cartels continue to take the coca and its profits. 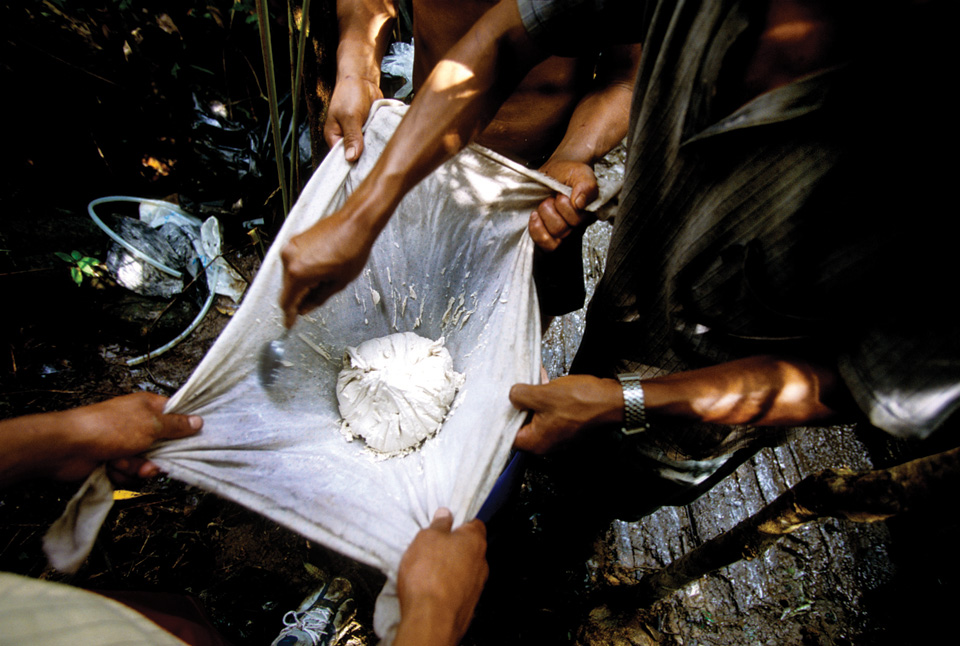 Paste from crushed coca leaves is filtered, compressed, and dried before being heated and transformed into solid crystals at this makeshift cocaine lab.

Bolivia’s losers have always been the same: the disenfranchised indigenous. With an annual income of just $1,150 per capita, Bolivia is the poorest country in South America. But it is a deeply organized, socially coherent poverty, rooted in centuries of survival through communal politics and labor cooperation. Even today, long columns of Aymara men can be seen stepping backward through the fields with foot plows, opening the ground as chanting women follow, seeding potatoes. And for the first time in history, the piratical outsiders have been stymied by a homegrown revolution and its thin but consoling power. 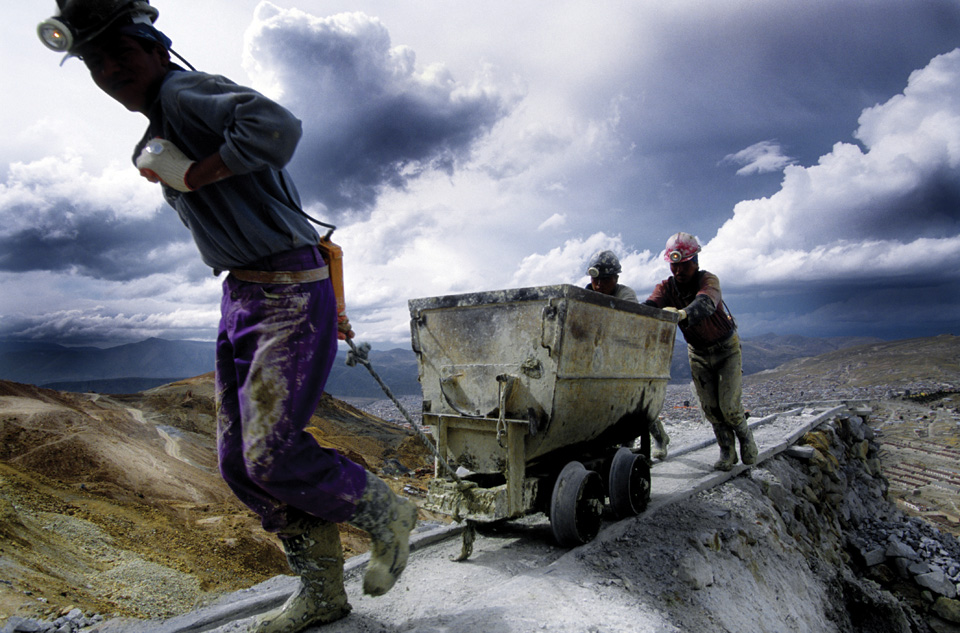 In Bolivia’s mines, men and as many as 8,000 young children endure horrific conditions to feed the world metal market; chewing on coca leaves offers the miners a traditional analgesic and appetite suppressant. 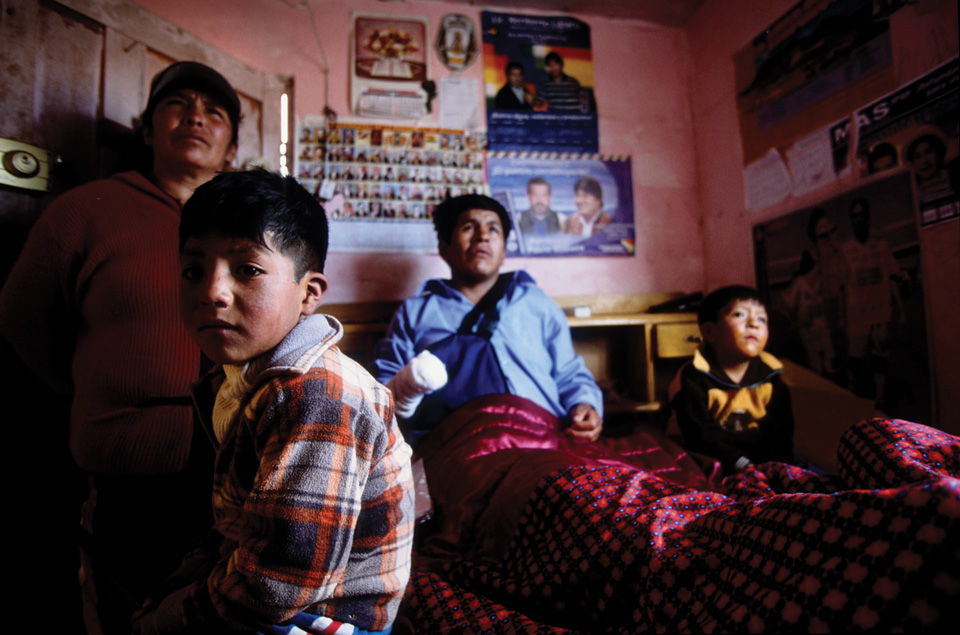 In a clash between miners, Nolberto Mamani Apaza lost his hand. His 9-year-old son will have to take his place in the mines. 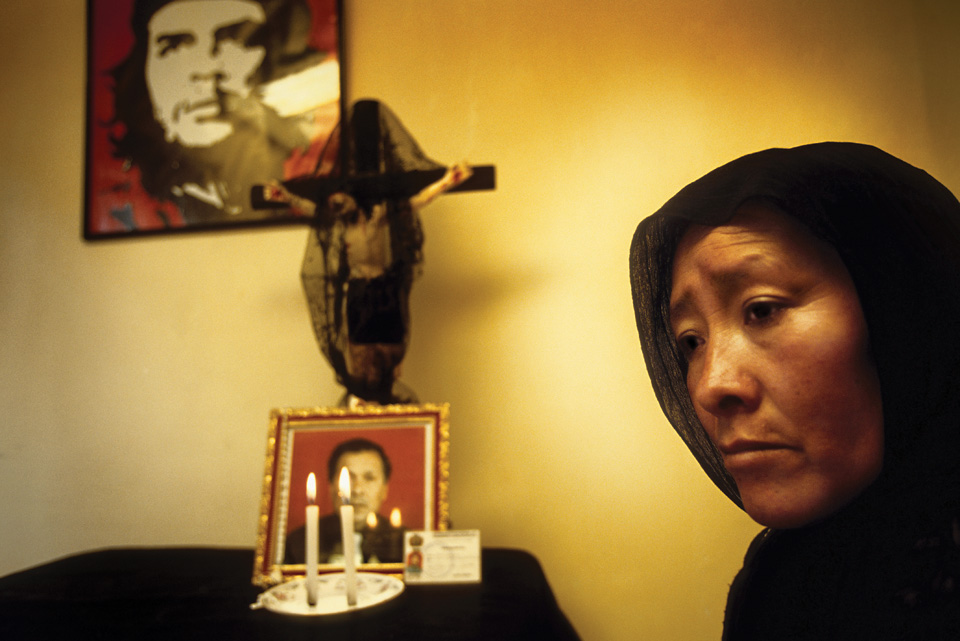 The wife of a miner who was killed in a clash in Huanuni sits in her kitchen the day after his death. Dynamite used in the fighting destroyed part of their village, and several people were buried as a result.

It was the gas war of 2003 as well as dissatisfaction with the American-led war on drugs that led the brown masses to march on La Paz and usher out the last of Bolivia’s white-led, semi-colonial governments. Real, broad elections summoned for the first time an indigenous leader, Evo Morales, to the Palacio Quemado, or “burned palace,” so named for being repeatedly torched during the more than 150 ruling-class coup d’etats that have marked Bolivian history. With its mixture of idealism and limited but sharp violence, this latest uprising was more like the Ukranian Orange Revolution than the Castro-style putsch feared by K and Wall streets. The alpaca-sweater-wearing Evo celebrated his inauguration at the ancient city of Tiahuanaco, at the ruins of a pre-Columbian site of sun worship. In accordance with mass demands for democracy and transparency, his administration struck a populist tone, signing trade deals with Venezuela’s Hugo Chávez, nationalizing foreign-controlled oil and gas industries, paying students to attend school, and updating the face of nationalism, evidenced by the endless television programs in which indigenous people present their grievances and are, for the first time in Bolivian history, actually heard. The revolution is by no means perfect. Corruption persists, and Evo has not hesitated to toss the race card back in the face of the white elite who exploited it during the last century. Still, there is no turning back the clock on the rise of a new majority. 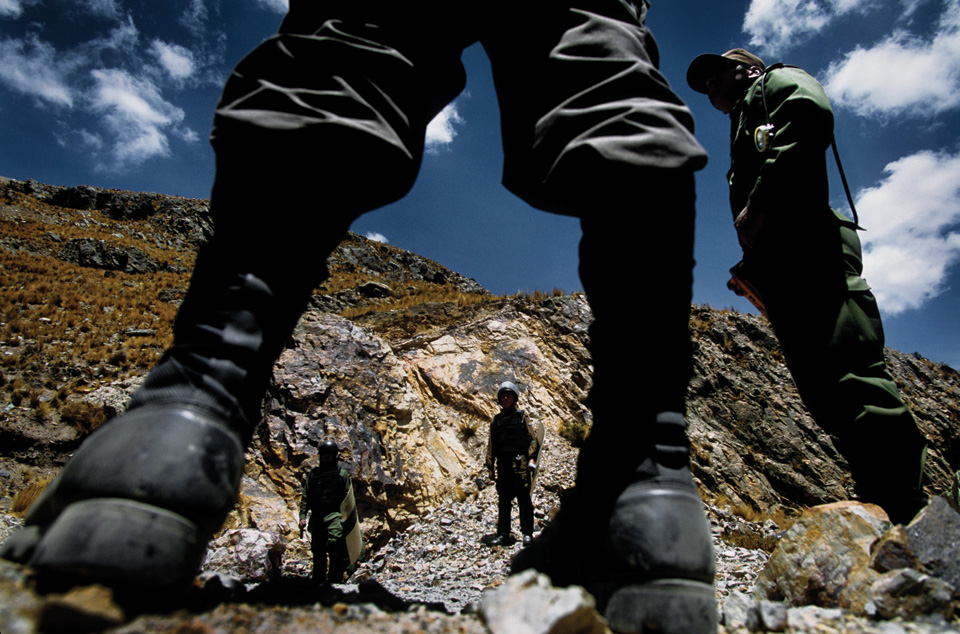 These Bolivian soldiers were sent to the mining town of Huanuni to deter further fighting among miners. 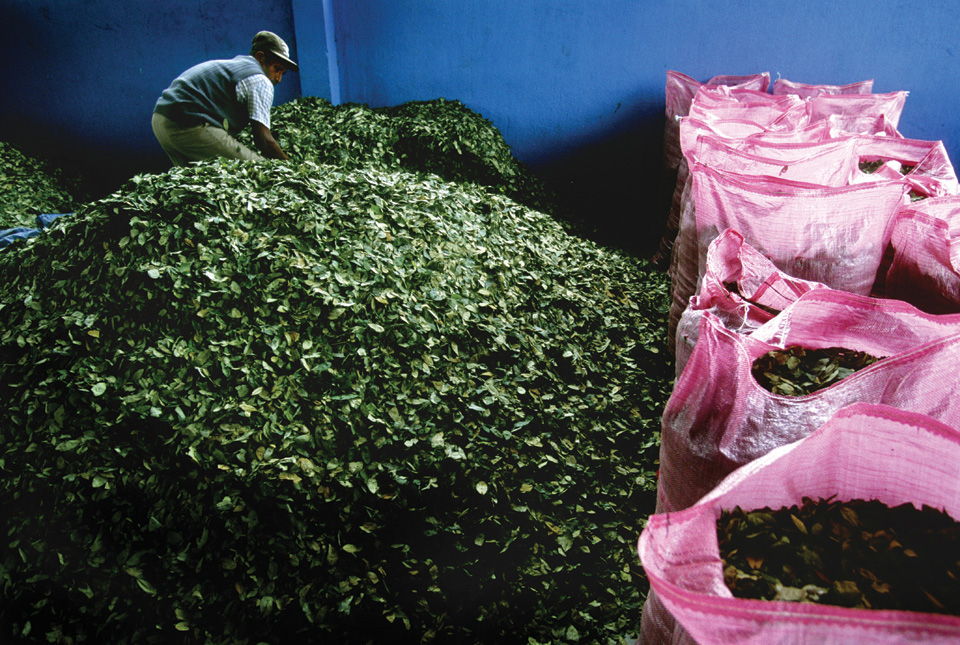 This coca farmer is preparing to sell his harvest in the market of Eterazama, the hottest spot in the so-called Red Zone, the area where most Bolivian cocaine is produced. 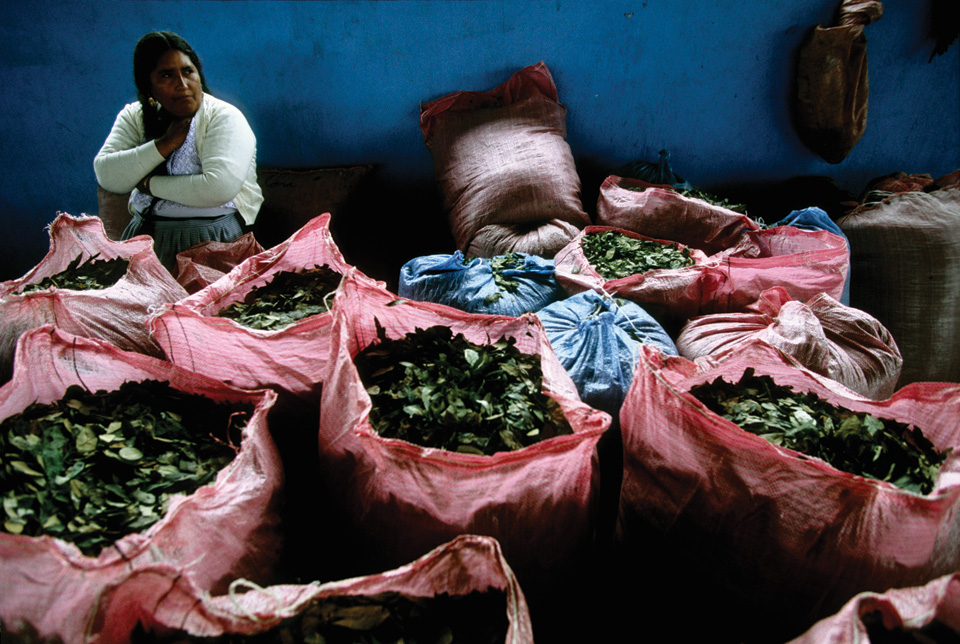 These leaves in the Eterazama coca market are too bitter to be chewed—they are destined instead for the cocaine market.

But having asserted their power, Bolivia’s indigenous people—a clear majority in a nation of just 9 million, but divided into many language groups—face the challenge of forging a movement larger than identity politics. Increasingly the Aymara are fleeing altiplano poverty for the tropical promise of the lowland coca business, uprooting their ancient way of life for a risky, marginally profitable role as peons in the international drug trade Urbanized “Indians” are in reality sharply divided between established cholos, a bowler-hatted business class with longtime roots in La Paz and other cities, and the ever-swelling ranks of newcomer refugees who crowd into El Alto and other chaotic, emerging neighborhoods, scratching out a living as porters, gardeners, and ditchdiggers. Regionalism is spinning the country apart, pitting the national government high in La Paz against the economic powerhouse of lowland Santa Cruz. Fresh, angry slogans in La Paz cry out eliminate private property, less a practical demand than a warning of the impossible expectations that await reformers. 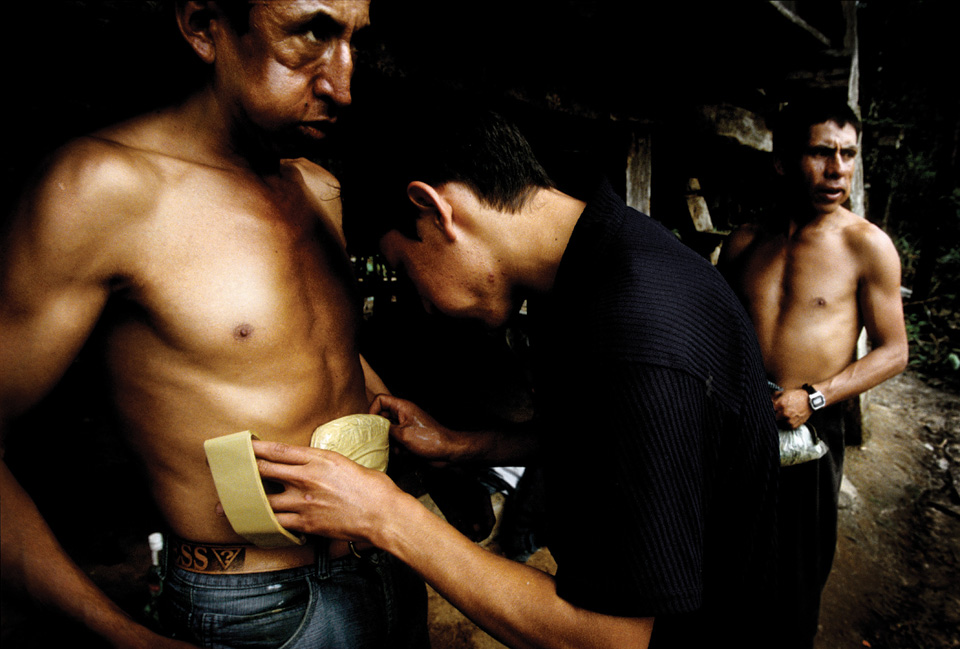 The owner of a cocaine lab helps his couriers strap the drug onto their bodies. 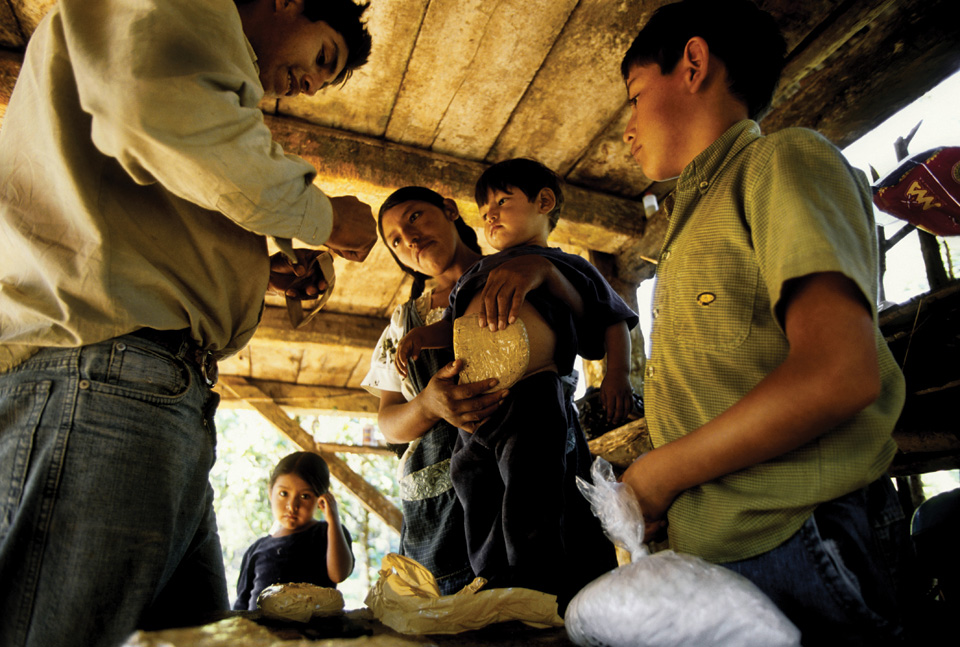 Buyers tape packs of cocaine to children for transport to the city. 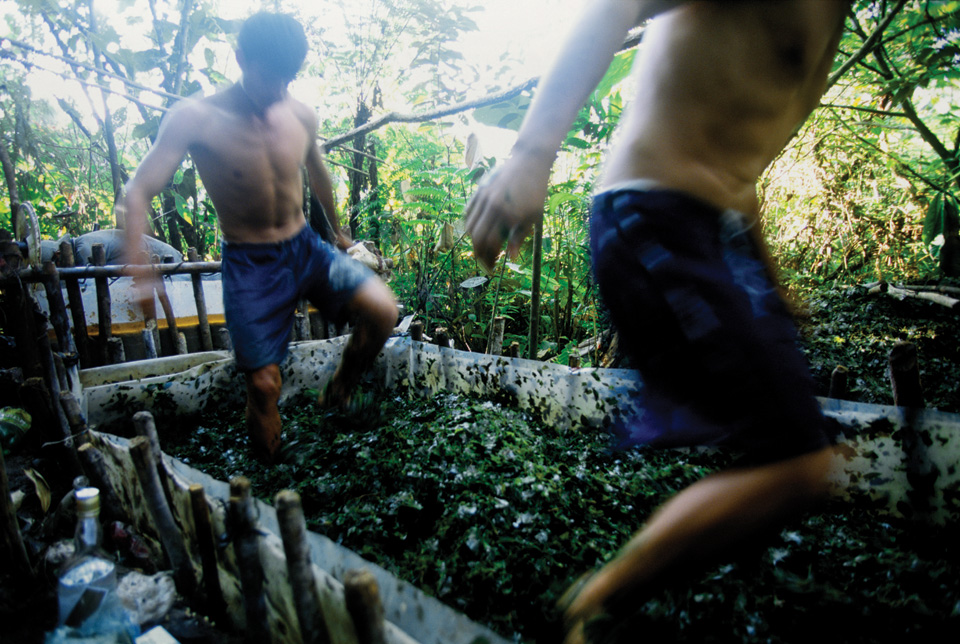 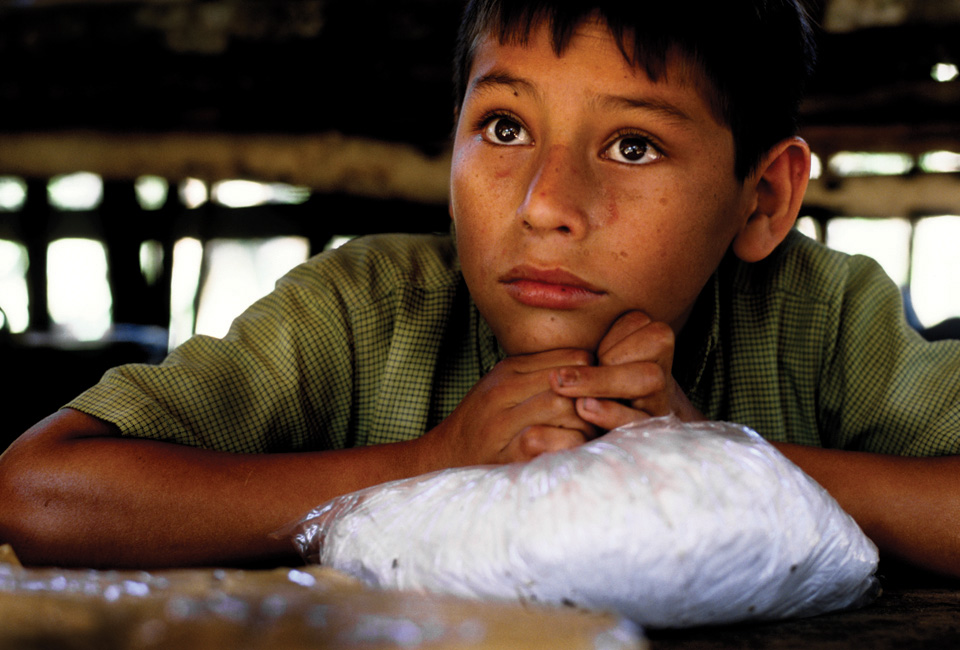 In the Chapare region, the cocaine business involves the whole family.

Many who remain in the mountains resort to the pittance earned by mining for gold, silver, and tin. Under Spanish rule, these same mines cost the lives of millions of indigenous and African laborers. Thanks to the global boom in metal prices, mines previously considered exhausted tempt a new generation of boys who descend into impossibly dark, narrow, unventilated veins of the Andes, chewing coca to suppress their appetite, fatigue, and fear.

Coca has always been a palliative for Bolivia’s poor, but only recently has the country become central to the global cocaine market. As Washington squeezed the coca balloon in Colombia, it has bulged out in southern Bolivia, where production has increased, even as the United States now pours $66 million a year into interdiction, military and police training, and DARE anti-drug classes for 28,000 Bolivian students. America has focused on crop eradication, and efforts to help Bolivians cultivate replacement crops have mostly failed. 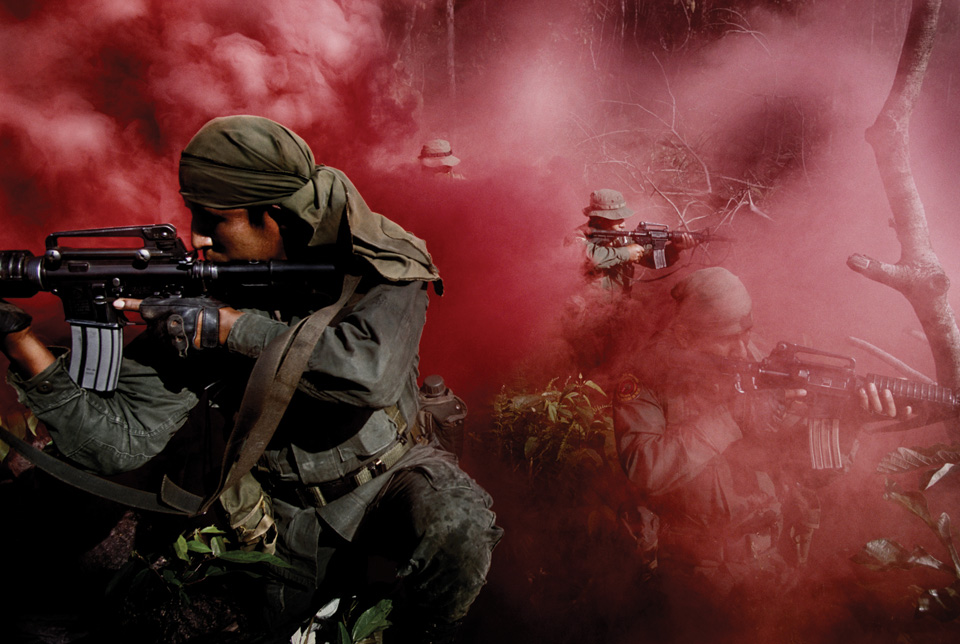 Trained and funded by the United States, Bolivian police take out a small lab in the forest. They throw red smoke to signal their position to helicopters flying above the forest. 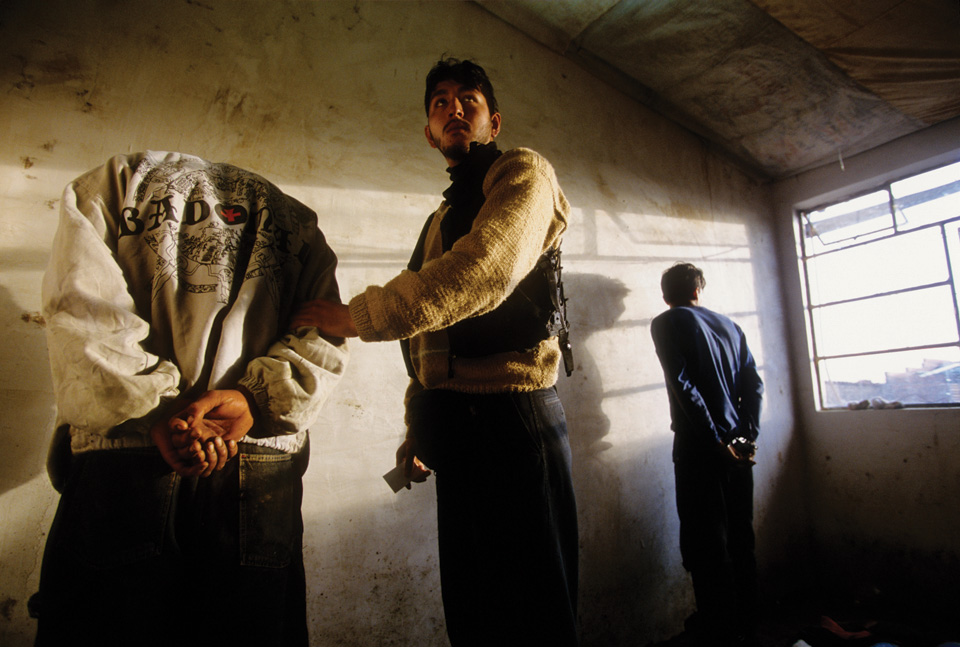 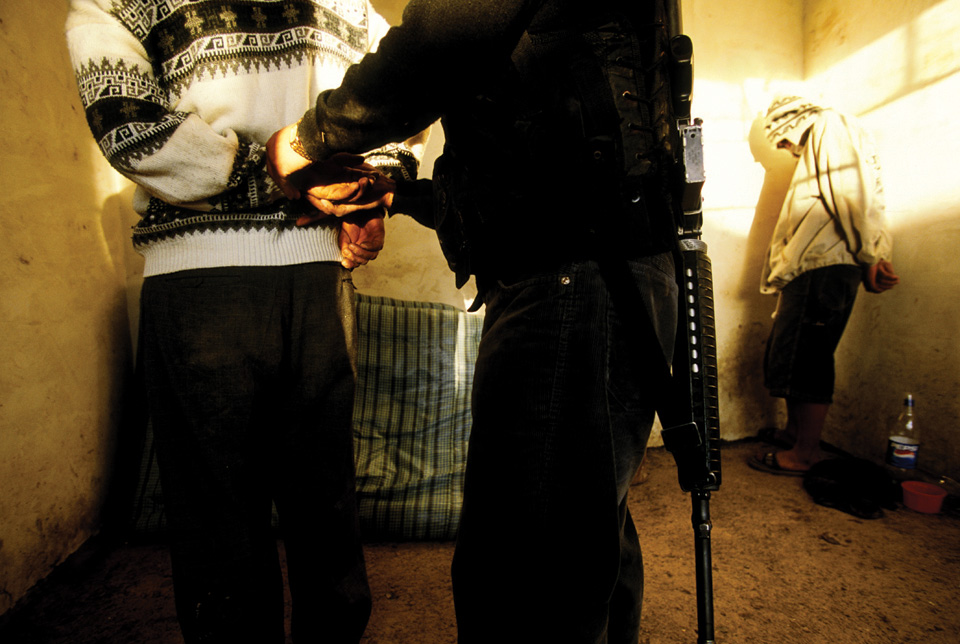 Along the Bolivian front of the war on drugs, low-level arrests don’t do much to stanch the flow of cocaine.

A former coca farmer and coca-union leader who railed against American-led programs, Evo Morales ran on a Coca Sí! Cocaína No! platform. He keeps a portrait of Che Guevara made entirely from coca leaves on his office wall and never misses a chance to serve coca tea to visiting politicians. But the leaf traditionally grown at high altitude and chewed by indigenous Bolivians has become a Trojan horse for the broader cultivation of a more bitter, unchewable, low-growing leaf useful only to narcotraffickers. Washington tabulates successes like body counts, claiming that in 2007, precisely 3,093 labs and maceration pits (often little more than plastic-lined ruts where cocaine paste is mixed) were destroyed, 13.8 metric tons of cocaine base were seized, and Bolivia’s anti-narcotics police carried out 8,269 operations. The real gains are ephemeral. Armed and trained by the United States, Bolivian commandos chase low-level producers through Evo’s Chapare region; meanwhile major traffickers sometimes walk out of jail, as pure and cheap cocaine floods onto world markets. On a fundamental level, the war on drugs is like all the other commodities wars Bolivia has endured: Rural peasants take all the risk—going so far as transporting coca by strapping it to the bodies of their young children—while outside traffickers take most of the profits. 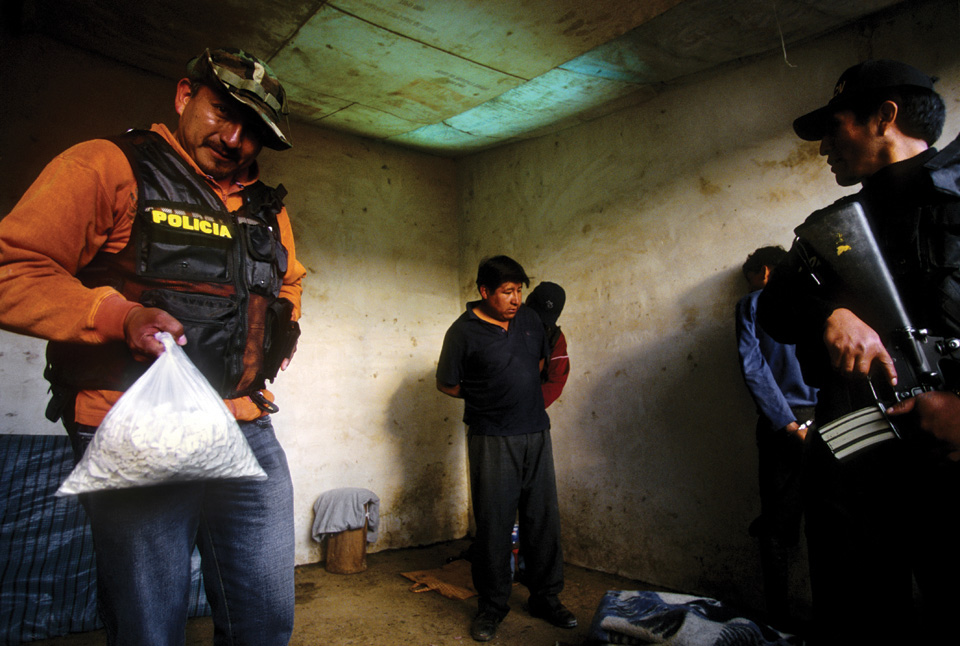 Out of poverty and ill health, former miners often look for a fresh start as coca growers. But the cocaine business is a poor trade to make.