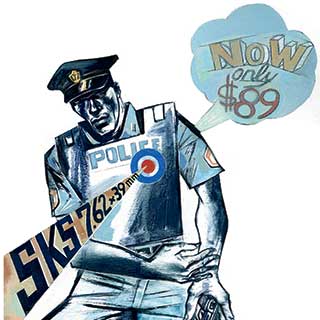 In a warehouse on the outskirts of the rural Shenandoah Valley town of Fishersville, Virginia, it didn’t take long to spot what I was looking for. There were plenty of guns lined up neatly on display tables, everything from Civil War-style muskets to handguns to hunting rifles, but I was in the market for something with a bit more firepower. At a table near the entrance, I found it: a Chinese-made mak-90 semiautomatic rifle, a variation of the Russian AK-47 designed to circumvent federal regulations on the import of assault weapons. “It’s the same gun,” the dealer told me. “They just eliminated the pistol grip, replaced it with a threaded thumb grip, and took off the flash suppressor.” This particular model came with a five-round detachable clip, but the dealer assured me it would accept larger magazines, including a 75-round “ammunition drum.” He was uncomfortable trading in handguns, he said, explaining that “there’s too much controversy about them,” but was willing to sell the mak-90 to anyone with a valid ID and $450.

The reemergence of imported assault rifles on the US market signals a dramatic shift in federal firearms policy. By 1998, four years after a federal ban on assault weapons took effect, gun manufacturers had easily managed to bypass the law by making small alterations to their weapons. To close the loophole, the Clinton administration prohibited the Bureau of Alcohol, Tobacco, Firearms, and Explosives from granting import permits for 58 types of assault weapons, adding to an import rule first put in place by George H.W. Bush. These included dozens of AK-47 variants and other high-powered semiautomatic rifles that could accept high-capacity magazines originally designed for military use.

But not only did the current Bush administration allow the 1994 assault weapons ban to lapse, it has also, through the atf, permitted gun manufacturers to game the import rules, effectively reopening American borders to foreign assault weapons. While the import ban remains nominally in force, gun importers are now able to easily skirt it by assembling the guns in the US. Describing the manufacturing process at Florida-based Century International Arms Incorporated, a leading importer of foreign assault weapons, an official in the atf‘s firearms import branch told me “they import the parts” and combine them with US-made materials specifically prohibited by the import ban. That way, technically speaking, the guns “are made in this country,” he said. But according to Kristen Rand, the legislative director at the Violence Policy Center, a Washington-based gun control advocacy group, the atf is simply shirking its responsibility. “They’ve created this Alice in Wonderland world, where if you take it apart and put it back together then it’s no longer an import, but the end result is the same,” she says. “They just keep making this their own moving target.”

Another loophole was created for the sks semiautomatic carbine, developed in 1945 for use by the Soviet army until it was replaced by the more rugged AK-47. The Bush administration reclassified the sks as a “curio,” adding it to the atf‘s list of such weapons, most over 50 years old and considered collectors’ items, that are automatically authorized for import. However, the atf reported in 2002 that the sks was “the rifle model most frequently encountered by law enforcement officers” and noted that the guns “are capable of penetrating the type of soft body armor typically worn by law enforcement officers.” Since being added to the atf‘s curios list, the sks has become one of the cheapest assault rifles on the market—less expensive, at between $89 and $250, than most handguns.

Yet even as foreign-made assault weapons are pouring in, information about their importation and use in crime is no longer accessible. The atf maintains databases both of the firearms-import licenses it has granted and of the traces it has conducted on weapons recovered at crime scenes. But in 2003, at the urging of the National Rifle Association, Rep. Todd Tiahrt (R-Kan.) attached a last-minute amendment to a spending bill, prohibiting the agency from publishing import and trace data. (“I wanted to make sure I was fulfilling the needs of my friends who are firearms dealers,” Tiahrt told the Washington Post.) The nra‘s motivation, says Dr. Garen Wintemute, an ER physician and director of the Violence Prevention Research Program at the University of California-Davis, was to prevent atf data from being used against the gun industry in court. “Cities and advocacy organizations were bringing litigation against gun manufacturers for irresponsible marketing and also, in some cases, against individual retailers,” he says. “Complete trace data would have helped them in doing that.”

In March, however, the Associated Press managed to obtain atf trace data for 2007, which showed a sharp increase in the number of trace requests for weapons, such as the AK-47 and sks, that fire 7.62-by-39-mm rounds—from just 1,140 traces in 1993, the year before the assault-weapons ban was enacted, to 8,547 last year. Already, since the ban’s expiration in 2004, the atf has documented an 11 percent rise in the number of traces run on AK-47s and similar weapons—an increase that suggests more AKs are on the streets and are being used to commit crimes.

At the Fishersville gun show, crowd members seemed particularly drawn to the assault weapons on display—hefting them, staring down their barrels, sliding open their metal bolts with a satisfying action-movie click. In addition to the AKs, dealers displayed dozens of AR-15s, a semiautomatic variation of the US military’s M-16, as well as a variety of World War II and Cold War-era surplus weapons. At one table, a little boy admired a .50-caliber sniper rifle, capable of downing a jumbo jet, while at another a man held a cheap Romanian AK knockoff to his shoulder. His T-shirt read “‘Freedom At Any Cost.’—Randy Weaver, Ruby Ridge, Idaho.” The only thing that prevented me from becoming the proud owner of a mak-90 was my Washington, DC, driver’s license: The district has the nation’s strictest gun rules. (At press time the law was under review by the Supreme Court.) But if I really wanted the mak-90, one dealer pointed out, all I had to do was move to Virginia.

There is, of course, a wide variety of assault weapons on the market. The expiration of the federal ban has essentially thrown the doors wide open—if the gun exists, you can buy it. But it’s the AKs that pose the greatest threat, primarily due to their affordability. Police chiefs in cities across the country are involved in something of an arms race, says Scott Knight, chief of the Chaska, Minnesota, police department and chairman of the Firearms Committee at the International Association of Chiefs of Police. “When I started as a police officer, we had our sidearm, and we had a shotgun in the car. Then we moved from the shotgun to a 9 mm carbine or rifle. And actually, I’m just moving from that 9 mm to an AR-15. The reason is that the officer has been encountering a better-armed offender with alarming regularity…a better-armed, better-equipped, more-ready-to-shoot criminal than in the past.”

Nowhere, perhaps, has this been more noticeable (and quantifiable) than in south Florida. Speaking at the National Violent Crime Summit, a gathering of law enforcement executives held in suburban Chicago last September, Miami police chief John Timoney described how AK-47s have become the weapon of choice among violent criminals in his city. “Two or three years ago, we had the lowest homicide rate since 1967 in Miami,” he said. “Then the homicides skyrocketed with the availability of AK-47s. And it went from 3 percent of all homicides being committed with AKs, up to 9 percent two years ago, then 18 percent last year, and this year it is around 20 percent. And it’s going up…We’re being flooded with these AK-47s.” Garry McCarthy of the Newark, New Jersey, police department agreed. “We’ve got a 30 percent reduction in shooting incidents this year, but only a 5 percent reduction in murder,” he said. “So it is higher-caliber bullets. I hadn’t seen an AK-47 in New York City going back 15 years…In Newark, in our first six or eight months, we recovered about 15 of them. [We have had] running gun battles through the streets.”

And if law enforcement is noticing an uptick in AK-style rifles, it may soon confront a smaller, more easily concealable version: the AK pistol. According to Dr. Wintemute, police recently recovered one in Newark. “You can hide such a thing easily in your pant leg, and you can put the magazine somewhere else,” he says. “You can be walking around the street with, in essence, a concealable rifle with hundreds of rounds of ammunition, ready to rock.” Advertising its Romanian-manufactured AK handgun, Century International Arms Incorporated calls it “a real conversation starter.”

Correction appended: A print version of this story incorrectly stated that fully automatic weapons in existence can not be purchased or sold. While these weapons can no longer be manufactured for civilian use under federal law, those registered before May 19, 1986, can still be obtained. The language in this piece has been changed to reflect the correct information. We regret the error.