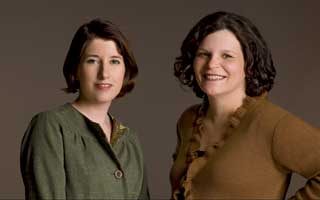 when we took the reins of this magazine nearly two years ago, the press response was not altogether kind. Two editors obviously meant a “power vacuum,” wrote Jon Carroll of the San Francisco Chronicle. Two female editors? “Cue the cat reorws and hisses!” snarked the New York Press‘ Hype Stalker. Carroll, mensch that he is, has long since apologized, writing last summer that Mother Jones “is as good as I’ve ever seen it.” We’ve yet to hear from Hype Stalker, but who cares? Now we have the verdict of journalists who actually know what they’re talking about. In May, the American Society of Magazine Editors bestowed on us its General Excellence award, our industry’s highest honor. We are especially thrilled for two reasons: For one, we were up against some of the most prestigious titles on newsstands today. For another, being honored for the efforts of a rookie year is a rarity.

In other words, WE ROCK! Now, usually we’re disinclined toward such self-promotion; it took us two years just to acquiesce to the art department and put our picture up in this space. But we can make an exception because, as any editor in chief should tell you, brilliance doesn’t reside chiefly at the top of the masthead. This award belongs to our smart and incredibly hardworking staff, many of whom started here as interns and have grown into leadership positions. They have (mostly cheerfully) embarked with us on what at times felt like an Ironman triathlon as we transformed Mother Jones from a bimonthly magazine into a 24/7 news organization. It’s been fun, but also a hell of a lot of work: We’ve added an eight-person Washington bureau, overhauled both our print and online identity, expanded our focus on training the next generation of investigative reporters (via what’s now the Ben Bagdikian Fellowship Program), and begun exploring what reader-sponsored journalism might mean in a new media age. And while conventional wisdom has it that magazine readers rebel against major changes, you have become more engaged and supportive. Thank you.

While we’re on house news, there’s something that isn’t apparent from this artfully cropped picture. At the time of the photo shoot, we were both pregnant. Monika (at right) now has a four-month-old (as well as two preschoolers). Clara is due with her first in July. And so, like all parents, we’ve been confronted with the abominably poor options when it comes to what is euphemistically called “work-life balance.” Mother Jones offers far better parental leave and flexibility than even most Fortune 500 companies, but no on-site day care. That’s because we’re a small shop—but what’s the excuse of a General Motors, Morgan Stanley, or Condé Nast?

Many would argue that figuring out the logistics and cost of child care is up to individual families; if that burden falls harder on women and people lower down the income pyramid, so be it. This notion—that American individualism is incompatible with shared responsibility—is a shopworn talking point of the Chamber of Commerce set. We confront a related fallacy when it comes to the economic crisis. It has been presented as if the problem were one of homeowners too stupid to live within their means, when in fact, in the absence of sensible regulation, financial institutions chose not to live within theirs. Yes, maybe we were all kidding ourselves when we fell for the home-equity sales pitches; surely we were anxious for economic security at a time of vaporizing pensions and disappearing jobs. But let’s not forget that the financiers who sold us this fantasy were taking out the equivalent of gargantuan home-equity loans—only without even an overleveraged house to back them up. Talk about irresponsible borrowing.

They managed to do this by the same free-market, anything-goes logic that hangs parents out to dry. How? For 30 years, the financial industry and its Capitol Hill handmaidens worked tirelessly to demolish Depression-era safeguards. The result: a $62 trillion credit derivatives market, nearly four times the size of the US stock market, deliberately engineered to operate outside the bounds of any public oversight. And yet John McCain is obviously simpatico with this approach. Or why would he have hired Phil Gramm, the chief architect of this debacle, as his “economic guru”?

Even the banks have not been immune to the consequences of their deregulation crusade. But given that our savings, our pensions, our jobs, our homes, and the value of America’s currency itself are bound up with their misfortune, that’s small solace indeed. As it stands, borrowers and investors have lost trust in the banks; banks have lost trust in each other; and the world has lost trust in the American economy. No tidbit of sunny financial news, no marginal improvement in some economic indicator is going to fix this fundamental problem. That will take a more serious rebuilding of the financial system, and the politics governing it.