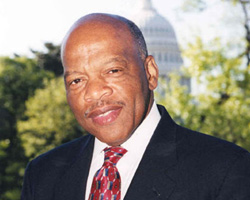 During Saturday’s presidential forum at Rick Warren’s California megachurch, John McCain was asked to name the “three wisest people” he would “rely heavily on” if elected president. He didn’t cite close confidantes Phil Gramm and Randy Scheunemann, possibly because they have gotten McCain into trouble politically. Instead McCain chose Gen. David Petraeus; former eBay CEO Meg Whitman, one of his economic advisers; and Rep. John Lewis (D-Ga.), a leading figure in the civil rights movement.

This is not the first time McCain has invoked Lewis’ name on the campaign trail. Earlier this year, in Selma, Alabama, he told the story of civil rights marchers trying to cross the Edmund Pettus Bridge in a 1965 march from Selma to the state capital of Montgomery. Waiting at the crest of the bridge were a brigade of police and state troopers who meted out an attacks so violent that the day is known today as Bloody Sunday.

Central in McCain’s telling was John Lewis, a man of just 25 who was at the front of the march and absorbed the first blow. Millions of Americans, McCain noted, “watched brave John Lewis fall.”

But even though McCain has now repeatedly cited Lewis as a role model and potential adviser, McCain has not established a relationship with the Georgia Democrat in the 22 years they have served in Congress together. At the time of McCain’s Selma speech, a Lewis associate told my colleague David Corn that McCain has never been close to Lewis. Lewis was not told about McCain’s speech in Selma in advance, nor was he invited to attend.

In response to McCain’s latest invocation of his name, Rep. Lewis said in a statement requested by Mother Jones, “I cannot stop one human being, even a presidential candidate, from admiring the courage and sacrifice of peaceful protesters on the Edmund Pettus Bridge or making comments about it.” But, he added, “Sen. McCain and I are colleagues in the US Congress, not confidantes. He does not consult me. And I do not consult him.”

It took McCain years to fully embrace the goals that Lewis was fighting for on Bloody Sunday. In 1983, McCain voted against making Martin Luther King Jr.’s birthday a national holiday, in opposition to most members of Congress, including many of his Republican colleagues. In 1987, the governor of Arizona repealed the state’s recognition of King; McCain supported the move. It was only in 1990, 25 years after Lewis marched in Alabama, when Arizona reversed its decision that McCain changed his own stance on the issue.

And there are, of course, the fundamental differences between John McCain’s political philosophy and the goals of Lewis and his fellow marchers. Lewis hoped that the federal government would use its influence to protect the rights of disenfranchised individuals; he sought an expanded role for government because of what he believed was government’s power to do good. It explains, in part, why Lewis is a Democrat today and supports Barack Obama for president. McCain, on the other hand, is a fanatical enemy of government spending and has said, “I’ve found over time that less government involvement is better.” It’s a philosophy that would have left Lewis and his cohorts out in the cold.