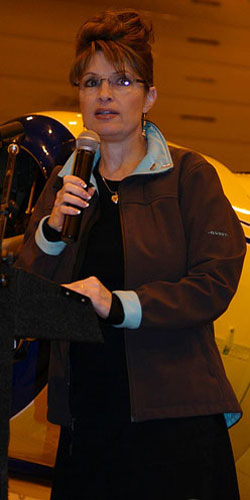 John McCain’s selection of Alaska Governor Sarah Palin as his running mate this morning was a bit of a shocker. After all, the vast majority of Americans have never heard of her. But that could be an advantage for the Republicans: suddenly, their convention next week isn’t about John McCain or George W. Bush. It’s about introducing Sarah Palin to America. That could be the best distraction imaginable from issues like Katrina, Iraq, and the economy.

On balance, though, Palin could be bad news for the Republicans. Unconventional running-mate choices (and a first term governor who until recently was the mayor of a town of about 9,000 people is certainly an unconventional pick) signal desperation. Confident candidates make safe picks. Candidates who are trailing and need to make big moves make unconventional ones. McCain is taking a big risk by picking Palin because he has to.

The selection of Palin smacks of tokenism. Every four years, the Republican party trots out its few non-white, non-male leaders for the Republican National Convention. Many get prime speaking spots. Apparently Sarah Palin gets the Vice-Presidential nomination. The pick is clearly partly directed at disaffected Hillary voters with the idea that simply putting a woman on the ticket will win their votes. This is obviously wrong, as Walter Mondale and Geraldine Ferraro will tell you. But the GOP and their mouthpieces don’t get it: on Fox this morning, an anchor said: “It looks like the glass ceiling hasn’t been broken by Hillary Clinton, but by Senator McCain.” There is just so much wrong with that sentence, but for starters: it’s obvious that this pick is more about John McCain than Sarah Palin. It’s not about women succeeding on their own; it’s about them being given something by a man. Frankly, the comparison to Hillary Clinton is just insulting.

This pick could be bad for McCain in other ways, too. Consider the parallels between Palin and another youngish governor from a deep red state: George W. Bush. Like Bush in 2000, Palin is though of as a reformist conservative. But her actual positions and policies are hard-right. The trick the GOP has been pulling for years, and is trying again here, is to support the policies and priorities of the far right while pretending to be “maverick” or “independent”. There’s nothing about Palin’s politics that should appeal to Hillary Clinton supporters. Despite what you’ll hear about this pick confirming McCain’s “maverick” status, there are few VP nominees that would make conservatives happier than Sarah Palin does. She’s a favorite of the Club for Growth, virulently anti-abortion, disdainful of environmental concerns, and thinks “Intelligent Design” should be taught in schools. But despite her actual politics being virtually identical to Bush’s, Palin, like McCain, projects an image of independent-mindedness.

By far the most troubling part of this pick, however, is how it fits in with the central theme of the past eight years: the Rovian elevation of short-term political considerations over the actual governing of the country. More than anything, Palin is the perfect gimmick for today’s news cycle. The pick is great symbolism—the Republicans picked a woman and the Democrats didn’t! The media will eat it up: a “maverick” picking a “maverick”. And it knocks Barack Obama and the Democrats off the television and maybe limits the Dems’ convention bounce. There will be a lot of talk of change from the McCain campaign after this. But the McCain-Palin ticket raises a big question. Was it Bush and Cheney that made the Bush administration such a failure? Or was it Republican ideas and policies that were the problem? If the Obama campaign can convince the American people that our country is in a tough spot due to Republican policies, not just Republican politicians, then they’ll probably win. But if McCain and Palin can convince Americans that the business model is sound and the GOP just needs a change in CEO, than, well, you can probably say hello to your next Vice President.