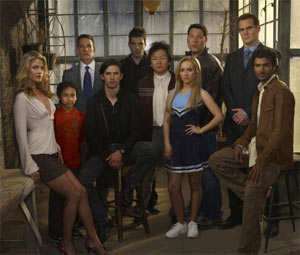 I’ve always believed part of science fiction’s power comes from its ability to offer both a narrative and a symbolic, fantastical metanarrative, that can either reinforce or supplant the apparent meaning of the narrative. Also, granted, I’ve been known to insist on, ah, somewhat sinister readings of current sci-fi hits, even when everybody thinks I’m nuts. But in discussing tonight’s mildly-anticipated season premier of Heroes, Times writer Alessandra Stanley seemed to reveal more of her own personal issues than elucidate any metaphorical meaning. Basically, she wants those damn kids off her lawn. She has no sympathy for the super-power-endowed mutants, calling the show a “venting of [their] self-pity,” and then makes a bit of a leap to those brain-searingly annoying spots for Freecreditreport.com:

Young people today can’t repay their college loans; they can’t afford apartment rents, let alone mortgages; their Social Security is being sucked up by their elders; and H.I.V. left them out of the sexual revolution: what was once free love is now a viral minefield. It’s a plight lamented in books like “Generation Debt” and even in ads for Freecreditreport.com that showcase debt-crippled lads gamely doing menial work as they warn others about the dangers of letting bills pile up.

“Heroes” gives its fans cathartic validation: You inherited a screwed-up world, and it’s not your fault.

These heroes are not driven to mistakes or misdeeds by their own personality flaws and weaknesses. When paranormal protagonists like Peter Petrelli (Milo Ventimiglia) get hurt, harm innocent people or put the fate of the planet at risk, it’s because they were deceived by evildoers who pretend to be on their side in order to betray and destroy them (credit card companies). They are vulnerable to strange, often biologically engineered strains of viruses; one could wipe out all humanity, another strips people with supernatural abilities of their power.

Okay, so ultra-creepy ability-sucker evil villain Sylar is, um, MBNA, in this reading? And his slicing off the tops of his victims’ heads is… high interest rates?

Stanley’s not done attacking this nation of whiners, though, taking on all of the “coddled, indulged, and overprotected” Generation Y and the conveniences they take for granted, like, well, cash machines. I guess Stanley had to walk uphill through the snow to get her dollar bills when she was our age? Well, however old she is, she’s definitely curmudgeonly: just yesterday, her article on sitcoms decried the loosening of our nation’s taboos as leading directly to unfunny dreck like CBS’ Worst Week. Right: If only women still covered their ankles, maybe we’d have some better TV comedies!

Grumbly Times writers aside, it will be interesting to see if Heroes can recapture some of its original magic. I’ve described more than once here on the Riff how this little show, hiding behind its generically-patriotic title, pushed the boundaries of what you could do on TV. But I do have to admit I completely lost interest last season. If NBC can give me more Hiro and a little less Mohinder, maybe I’ll tune back in. (Oh yeah, it’s on at 9pm).