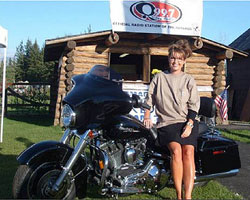 As part of an effort to beat back the investigation into whether Governor Sarah Palin fired Alaska’s public safety directory Walt Monegan because he refused to dismiss a state trooper involved in an ugly divorce with her sister, Palin’s attorney filed papers on Monday claiming that Palin fired Monegan because of his “outright insubordination” regarding policy and budgetary matters. The problem with this explanation: it directly contradicts Palin’s own story.

In mid-August, Palin spoke with New Yorker writer Philip Gourevitch, who was in Alaska–prior to Palin being named John McCain’s running-mate–to do a piece on “the peculiar political landscape” of the state. During his time there, the controversy regarding Monegan’s dismissal was in the news in Alaska. And Gourevitch asked Palin about it:

[Palin] said that one of her goals had been to combat alcohol abuse in rural Alaska, and she blamed Commissioner Monegan for failing to address the problem. That, she said, was a big reason that she’d let him go–only, by her account, she didn’t fire him, exactly. Rather, she asked him to drop everything else and single-mindedly take on the state’s drinking problem, as the director of the Alcoholic Beverage Control Board. “It was a job that was open, commensurate in salary pretty much–ten thousand dollars less”–but, she added, Monegan hadn’t wanted the job, so he left state service; he quit.

In Palin’s telling–before any of this was of national interest–Monegan’s departure from the post had nothing to do with Troopergate and, in fact, he hadn’t even been fired. She had asked him to switch jobs; he had left state employment on his own accord.

Yet on Monday, the Palin side offered a much different tale. In a 19-page brief, Palin’s lawyer, Thomas Van Flein, contended that Monegan, while public safety commissioner, engaged in “an escalating pattern of insubordination on budget and other key policy issues.” Van Flein claimed Monegan had gone behind Palin’s back to work with state Senator Hollis French, a Democrat who is now leading the Troopergate investigation, on the budget for his department. And Van Flein maintained that Monegan’s “firing”–note the use of that word–came after Monegan planned a trip to Washington, DC, to seek funds for a project to combat sexual assault, an initiative that had not yet been approved by Palin.

Responding to Van Flein’s brief, Monegan said he has provided records to the Troopergate investigator, Steve Branchflower, about his tenure as commissioner, and he has continued to claim he was ousted by Palin because he refused to fire Palin’s ex-brother-in-law.

It is hard to square Palin’s mid-August explanation with the recent brief. Talking to Gourevitch, she suggested Monegan had not really been fired; the brief says he had. She said she wanted Monegan to take on a top-priority in another job; the brief says he was an insubordinate employee who could not be trusted. Would you give such a fellow another important job?

This is not the first Palin contradiction in this episode. She initially vowed to cooperate with the investigation. But after state legislators last week voted to issue 13 subpoenas in the case–including one for Palin’s husband, Todd–the McCain-Palin campaign on Monday said the investigation was “tainted” and Palin was “unlikely to cooperate with it.” (The subpoenas covered many top Palin aides, as well as the head of a company that handles worker’s compensation claims for the state. Branchflower told the legislators he had preliminary evidence that a Palin aide had pushed to cut off benefits to Palin’s ex-brother-in-law, Mike Wooten.)

Palin supporters are now dismissing the inquiry as a politicized probe. (Her lawyer has asked that the inquiry be conducted by a personnel board that is controlled by the governor.) And a family matter that became a state matter is now a national matter, with spinners and lawyers trying to influence the outcome, and the McCain-Palin campaign looking to kill the legislative investigation. In the days after Palin became the Republican Party’s nominee for vice president, it was unclear how Troopergate might affect the GOP ticket. Did the McCain-Palin campaign really have much to worry about? Given Palin’s conflicting explanations of Monegan’s dismissal, there’s now more reason to believe she does have cause for concern.