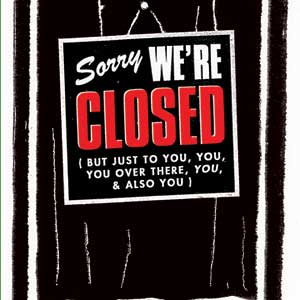 
Tactics to deny Americans the right to vote are as old as, well, the right to vote. Democrats have been at fault in the past—take the literacy tests Southern states used to deprive blacks of their suffrage from the Civil War up through 1965. Today’s shenanigans—which still target minorities and vulnerable first-time voters—are more often designed to stifle Democratic turnout, perhaps never more than in 2008. “This is obviously an important election, and the turnout may break records,” says Rice University sociologist Chandler Davidson, who has studied vote suppression, “so there is every reason to expect these tactics will be employed.”

Card the Centenarian
Arizona‘s Proposition 200, passed in 2004, makes would-be voters prove their citizenship with a passport, birth certificate, or other federal ID, but poor and elderly citizens often lack such proof. One 97-year-old woman who cast her first vote for fdr in 1932 had to wage a nine-month campaign to regain her voting rights after relocating from Kentucky. Lawyer Linda Brown of the Arizona Advocacy Network, part of a coalition suing to disable Prop. 200, says activists are dubbing Arizona “the state of Darwinist democracy. If you’ve got the stamina and an insatiable desire, you just may be able to register and vote before you die.”

Similar battles are playing out in Georgia, Michigan, Missouri, Utah, and Indiana, which saw its ID law upheld by the US Supreme Court in April, despite evidence that up to 43,000 citizens lacked the necessary ID—including a dozen retired nuns turned away from the polls during primary season.

sleaze meter: 8 out of 10 Fighting fraud is just a pretext for “a purely partisan effort, ” says Neil Bradley of the aclu‘s Voting Rights Project.

Playing With Matches
Four states—Florida, Iowa, Louisiana, and South Dakota—only let residents register if their Social Security or driver’s license numbers can be matched with entries in a state database. If you register as “Bill” but the database says “William,” or if a data-entry clerk sticks a typo in your name or birth date, tough luck.

sleaze meter: 3 Incompetence may be bipartisan, but critics argue that there will be more typos in the names of Hispanics, immigrants, and black women.

Leave a comment about voting conditions in Florida, Iowa, Louisiana, and South Dakota.

Prior Restraint
Felon disenfranchisement is the mother of all anti-suffrage tactics. When George W. Bush took Floridaby a few hundred votes in 2000, more than 600,000 state residents had been barred from voting because of prior offenses. Florida has since made it easier for some ex-felons to regain their rights, and several other states have tinkered with their laws. Even so, more than 5 million Americans will be unable to vote this fall because of felony records.

sleaze meter: 9 Because of disproportionate drug law enforcement, as many as 1 in 8 black men nationwide is excluded from the political process.

sleaze meter: 9 Even the current Justice Department told him to back off.

Leave a comment about voting conditions in North Carolina.

Leave a comment about voting conditions in Georgia and North Carolina.

Armed and Dangerous
Kentucky Republicans have been challenging the voting status of black residents in a variety of ways for decades. In 2004, following a contentious gubernatorial election, a voter-advocacy group reported that party members had “planned and organized what they hoped would be a well-publicized effort to place white Republicans primarily at black Democratic polling places, ostensibly to protect against vote fraud.”

Counting Crows
In 2007, a group called the Citizens Equal Rights Alliance (cera) unsuccessfully sued the state of Montana, arguing that polling places should be removed from the Crow Indian Reservation to prevent fraud. Native Americans in other states have also reported intimidation; allegations include gop poll workers copying down license plate numbers and following voters home.

sleaze meter: 9 From a cera dispatch: “When a separate government controls one minority, and its individual minority (Native American) voters can be coerced into bloc voting, that minority becomes a renegade ‘swing’ vote.”

When a Robo Calls
Malicious robo-calls during the 2006 congressional elections sent would-be voters to the wrong locations or harassed them at all hours. In California‘s 50th District, residents got late-night calls that seemed to be from Democrat Francine Busby; when people hung up, the computer redialed up to 14 times. (Busby lost.) Expect more of the same in November: “The price point has decreased so that anyone can set up these calls from their basement,” says robo-call watchdog Shaun Dakin.

sleaze meter: 10 Does the expression “ratfucking” ring a bell?

Political Hacks
High-tech voting continues to wreak havoc across the country. Monitors expect huge lines this November in Ohio‘s poorer precincts, some of which have bounced from one flawed technology to another; voters in Cuyahoga County will be on their fourth system since 2004, notes Dan Tokaji, an associate law professor at the Ohio State University. In 2006, touch-screen machines in Sarasota, Florida, came up 18,000 votes short during a congressional race that was decided by fewer than 400 votes. In 2007, University of California researchers successfully hacked into three state-sanctioned e-voting systems, compelling election officials to abandon the pricey machines. And during this year’s gop primary, e-voting machines failed in 80 percent of the precincts in South Carolina‘s Horry County.

Leave a comment about voting conditions in California, Florida, Ohio, and South Carolina.

Weapons of Mass Mailing
The Jim Crow-era trick known as “caging” has been revived by 21st-century gop operatives. Mass mailings go out to low-income areas, and if a letter is returned as undeliverable, the party uses it to challenge that voter’s eligibility. Besides intimidating voters, the challenges create mayhem at polling stations. Caging has been reported in Florida, Nevada, Ohio, Pennsylvania, Virginia, and Wisconsin, among others.

sleaze meter: 9 Measures to outlaw the practice have never made it out of committee in Congress.