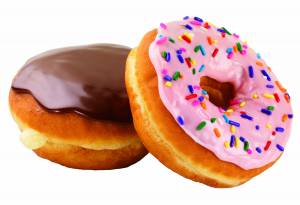 On Friday, Dunkin’ Donuts opened a LEED-certified store in St. Petersburg, FL which will donate leftover food, use worm composting, green cleaning products, and paper cups, and has insulated walls to cut 40 percent of air conditioning needs. But when every other Dunkin’ Donuts still uses Styrofoam cups, can we really expect significant changes among fast-food behemoths?

Chipotle, which used to be owned in part by McDonald’s, opened its first restaurant with a wind turbine in Gurnee, IL earlier this month. The storefront gets 10 percent of its electricity from an on-site wind turbine, has an underground cistern to collect rainwater for the landscaping, and is built with recycled drywall and barn material, among other things. Another similar-though-lacking-a-wind-turbine location opened last week in Long Island.

Yet Chipotle already has two other green storefronts in Austin, TX, plus four more in the works. Its “Food With Integrity” mission entails that all of its chicken and pork, plus more than 60 percent of its beef, is “naturally raised” without antibiotics or hormones, on vegetarian feed, and with space to roam. They started doing this with their pork in 2001.

Will other fast-food joints follow suit? Here’s what McDonald’s, Taco Bell, Subway, and Hardee’s are doing.

Subway’s five “Eco-Stores” incorporate sustainable building practices, but its much-publicized commitment to switching just one bulb in every store to a CFL—even though it may save 1,927,200 Kilowatt hours of energy—suggests that there’s work to be done. Hardee’s is moving toward energy-efficient lighting while Taco Bell is buying energy and water saving grills, but none of these modifications suggest company-wide shifts.

McDonald’s energy-saving initiatives earned it an Energy Star Partner of the Year award in 2007. (Restaurants consume the most energy of any retailer—five times as much per square foot than other commercial buildings.) Its other environmental moves, including recycling efforts, asking chicken suppliers to eliminate antibiotics used for growth promotion, and species conservation education, have gotten praise as well. But a firm specializing in sustainable business still suggests that McDonald’s address lacking labor standards and human rights issues in its supply chain.

Says Chipotle spokesperson Chris Arnold, they found that “customers have been willing to pay a bit more for better food.” It remains to be seen if other fast-food joints are willing to put their money where their mouth is.