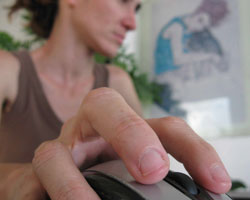 Havana-based writer Yoani Sanchez was recently named by Time magazine as one the 100 most influential people in the world, and she won the 2008 Ortega y Gasset award for digital journalism. But that didn’t stop Cuban authorities from directly threatening her with jail last week.

Or maybe that’s precisely why the dictatorial Cuban regime finds the 33-year-old Sanchez so intolerable. Her lyrically and masterfully written blog, Generacion Y, is the most prominent online site in Cuba—if such a thing even exists. Access to the Internet is severely restricted there, and the Havana government shows no hesitation in censoring a long list of sites, including Sanchez’s.

Now things are getting even tighter. Just as Sanchez was preparing to travel to the western edge of the island to participate in a first-ever two-day blogging workshop this past weekend, she was summoned to appear before state security officials. She posted the police warrant on her blog and then detailed the tongue lashing and direct threat she received when she showed up at the police station.

She reports on what she was told by the police, whom she referred to as “intimidation professionals”:

We want to warn you that you have transgressed all the limits of tolerance with your rapprochement and contacts with counter-revolutionary elements. This totally disqualifies you for dialog with Cuban authorities.

The activities planned for the coming days cannot [be] carried out.

We, for our part, will take all measures, make the relevant denunciations and take the necessary actions. This activity, in this moment in the life of the Nation, recuperating from two hurricanes, will not be allowed.

What recent natural disasters have to do with muzzling free speech is inexplicable. It’s not just Sanchez who got squeezed. So did blogger Claudia Cadelo, who was also called into a meeting with state security but didn’t make an appearance due to illness.

Last week the Castro government also imposed a new measure ordering Internet service providers to “prevent access to sites where the content is contrary to the social interest, morals or good customs; as well as the use of applications that affect the integrity or security of the State.”

The estimated 20 bloggers who planned to attend the workshop in the province of Pinar del Rio decided it would be more prudent to conduct their conference online instead of all showing up in one place and risking arrest. Writing on her blog, Sanchez celebrated the ingenuity of her blogging comrades, saying, “We ended up finding the cracks between the fingers of the censors, through which the fine sand of information and understanding managed to slip.” A press release on Sanchez’s blog from the workshop participants promises a contest among Cuban blogs.

As it stands, Sanchez and other Cuban citizens can only indirectly blog. She sends her dispatches from the island out by email to a network of foreign friends. They, in turn, translate her writing into several languages and maintain her popular blog, which has a worldwide audience.

None of Sanchez’s writing is overtly political. She crafts mostly highly styled, often heartbreakingly simple descriptions of daily life in Havana, an existence often marked by longing, disappointment, and frustration aggravated by an ossified society.

Here are the moving words she wrote a few weeks ago, soon after the election of Barack Obama:

For weeks, there are words like “ballot box,” “votes,” and “candidates” that persecute us everywhere. First there were the elections in the United States and now the issue has been revived with what happened on Sunday in Venezuela. It’s as if at the end of the year everything conspires to remind us of our condition as non-electors, our limited experience in deciding who leads us. You become accustomed to not being able to choose what to put in your mouth, under which creed they will educate your children, or to whom to open the door, but that resignation shatters when you see someone else vote. Because of this it has risen up, these days, the desire to fold the ballot, to push it into the slot and to know that with it goes my stentorian shout that demands: “to choose.”

In the recent past, the Cuban government has not flinched from jailing independent journalists it has accused of being “counter-revolutionaries.” Until now, it has refrained from locking up bloggers. But unless Sanchez and her fellow bloggers can mobilize support, they may soon face the full wrath of a regime that continues to criminalize free thought.