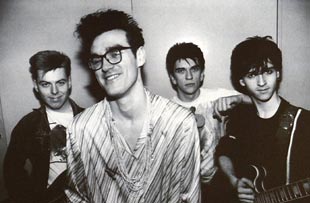 Or, “William, It Was Really Nothing.” Ahem. Reports emerged late last week that The Smiths were possibly maybe “on the verge” of a reunion, after lead singer Morrissey and guitarist Johnny Marr “settled their differences.” The UK Telegraph was reporting that “industry sources believe that a comeback could be imminent.” While just about every other band who ever broke up has already reunited, long-suffering Smiths fans likely didn’t get their hopes up (mostly because Smiths fans don’t really have any hopes to get up) and our abject cynicism and unfettered pessimism was proven right once again, as Marr has forcefully denied the rumors of a reunion to NME:

Marr issued a statement to NME.COM saying that rumours floating around that the band were reuniting were “untrue”. He declared: “The stories circulating about a Smiths reunion are, as usual, untrue.” Marr added he was committed to his current band The Cribs. “I’m currently very excited about writing and recording with The Cribs for a new album to be released next summer and we’re playing shows in February, so going back in time isn’t in my plans,” he said.

Considering your musical promiscuousness post-Smiths, I’m sure The Cribs totally believe you.

If you remember back to mid-2007, Morrissey reportedly turned down a £40 million (about $900 quadrillion US) (not really) offer to reunite for a Smiths tour, the only requirement being the presence of both himself and Marr on the same stage at the same time. Jeez, guys, you’d think it would be Mike Joyce and Andy Rourke who would hold the biggest grudges, but I guess Moz wanting to do Cilla Black covers really, really pissed Johnny off. Well, I’d say something like “heaven knows I’m miserable now,” but we all know I was already miserable.