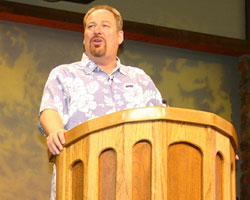 On Friday morning, I was on the CBS’ The Early Show to talk about the Rick Warren controversy. Opposite me (via satellite hookup) was Robert Jeffress, a Baptist pastor from Dallas, who was billed as a friend of Warren.

Asked by Harry Smith to explain why gay and lesbian outfits and progressives were upset by Barack Obama’s decision to hand Warren the invocation slot at the presidential inauguration, I noted that it was good that Obama has an inclusive approach toward political and policy debates, that he should make common cause with Warren on issues like poverty and climate change, and that it was wrong for him to grant Warren this high-profile platform because Warren’s anti-gay remarks–he recently compared homosexuality to incest and pedophilia–are insulting to a large number of Americans, particularly many who worked long and hard to bring Obama to the White House. It’s one thing to sit at the table with Warren and discuss how best to alleviate poverty; it’s another to enhance his status.

When Jeffress had his chance, he went on about how it was unfair to slam Warren as a hate-monger because of his fervent opposition to gay marriage.

Gay marriage? Who said anything about gay marriage? Not me. I had pointed out that Warren’s big sin had been to equate gays and lesbians with loathsome pedophiles. Is that hate-mongering? Some people might see it that way. But I was not going to judge Warren on that front. His words speak for themselves–and for him.

Jeffress, I’m guessing, realizes that his side is on more solid ground when the issue is gay marriage, not gay rights. Much of the public does seem to be opposed to gay marriage, but each year Americans are becoming more tolerant and accepting of homosexuality. Not Warren, though. He and other fundamentalists who despise homosexuality (hate the sin, right?) are on the losing end of a generational shift in the United States. Consequently, they are clinging to the gay marriage issue as a lifeline. And that’s why Jeffress quickly tried to redefine the issue. They want to keep attention focused on the altar, not acceptance.

By the way, Jeffress last year made some news of his own, when he proclaimed that GOP presidential candidate Mitt Romney was “not a Christian” because “Mormonism is not Christianity. Mormonism is a cult.” He has also called Islam and Hindu false religions.

So here’s a question: would Obama consider inviting Jeffress to give an invocation at an official event? I don’t believe he would, for that could rightly be considered an insult to Mormons, Muslims, and Hindus. Which brings us back to the original matter: since Warren goes beyond arguing against gay marriage to denigrate gays and lesbians as the moral equivalents of those who engage in incest and pedophilia, it is a slap in the face of gays and lesbians for Obama to award Warren this prime plum. He should have selected someone who, when it comes to morality, is more inclusive.

This was first posted at www.davidcorn.com.

Photo by flickr user All About You God used under a Creative Commons license.