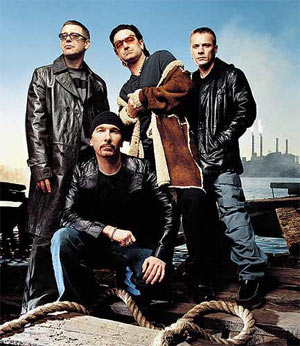 Irish combo U2 will release a new album, No Line on the Horizon, on March 3, the band’s label announced yesterday. Horizon was originally expected this year, but there were some false starts: material recorded in 2006 with producer Rick Rubin was tossed, and longtime U2 collaborators and producers Brian Eno, Daniel Lanois and Steve Lillywhite were brought back in; then, as the album was nearing the finishing stages, the band decided it needed two more songs. But I guess they finally finished the thing, and Billboard quotes a source as calling the material “amazing and a little out there.” Okay!

Horizon will be U2’s twelfth studio album, the follow-up to How to Dismantle an Atomic Bomb, which has sold over 9 million copies worldwide since its 2004 release. The band is also planning a 2009 tour as part of its crazy-lucrative stock deal with Live Nation.