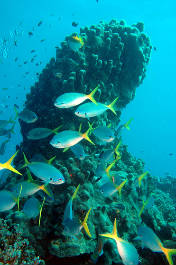 Scientists from the Australian Institute of Marine Science report that the Great Barrier Reef, the world’s largest reef system (visible from space), is facing historic peril. Not that this is news. Mother Jones has reported extensively on the subject. But new research published in the journal Science includes the largest study to date about environmental damage to Australia’s reefs.

The reef is experiencing is slowest growth rate in nearly 400 years, and gone unchecked, could lead to zero growth by 2050, says Glenn De’ath, the study’s co-author. “When you disturb an ecosystem in this way, you get a cascading effect. You then get a chain reaction — the fish habitat is lost.”

What’s to blame? The usual suspect: global warming. Rising sea temperatures are causing coral bleaching, in which corals release the algae which nourish them. The effect is grimly obvious underwater, where previously vibrantly colored reefs come appear like piles of bones. Without algae, corals eventually die. Says De’ath, “We may have seriously underestimated the rate of climate change and this should compel us to drastic steps to decarbonise Australian and global economic systems.”

Photo used under a Creative Commons license from Leonard Low.