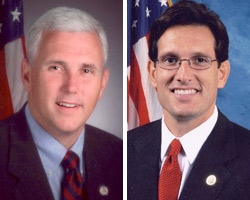 Are House Republicans reading the reports from the non-partisan Congressional Research Service? Because if the language they used Tuesday at a series of Capitol Hill press conferences on the stimulus is any indication, they are not doing their homework.

Congressman Mike Pence of Indiana, the third-ranking Republican in the House of Representatives, kicked the day off with a morning press availability. Reacting to the town hall event President Barack Obama held in his state on Monday to sell the stimulus to ordinary Americans, Pence called the bill a “monstrous wish list of tired liberal spending priorities.” Sitting in a well-appointed conference room on Capitol Hill, he insisted that a “so-called stimulus bill” loaded with spending would never get the support of the conservative House GOP caucus. “We’re going to dig in, almost irrespective of the polls.” He then noted that support for the bill is dropping in the polls.

The one thing that Pence pointed to as a panacea, both for the nation’s economic problems and for the bill’s lack of bipartisan support, was tax cuts. “The fastest way to jumpstart an economy in a recession,” he said, is to give tax relief to families and small businesses. He noted that he too had held a town hall in Indiana, and the biggest rounds of applause always came for tax cuts.

A few hours later, the number two Republican in the House, Congressman Eric Cantor of Virginia, held his own press availability. “Poll after poll” show that Americans want tax cuts, he said. He claimed that a plan put forward by House Republicans that is heavy on tax cuts will cost half as much as the current stimulus and create twice as many jobs.The problem is that few people who study economics see things the same way as the Republican leadership. Liberal economists such as Paul Krugman, James Galbraith, and Dean Baker, have been clamoring since the beginning of the stimulus debate that massive infrastructure investment is a far better stimulant than tax cuts. But the conclusion is not an ideological one. Mark Zandi, the universally respected chief economist for Moody’s Economy.com, released data (represented in several handy charts floating around the web) that showed food stamps, unemployment benefits, and infrastructure spending are all better at stimulating the economy than tax cuts.

And now, an unimpeachable non-partisan source has been revealed as coming to the same conclusion. Early this week, thousands of reports from the Congressional Research Service, which exists to provide unbiased answers and info to curious lawmakers, were leaked on the website wikileaks.org. One such report from January 23 of this year called “Economic Stimulus: Issues and Policies” makes it clear that the GOP’s talking points place ideology over good economics. “Economists generally agree that spending proposals are somewhat more stimulative than tax cuts since part of a tax cut may be saved by the recipients,” says the report. “The primary way to achieve the most bang for the buck is by choosing policies that result in spending, not saving. Direct government spending on goods and services would therefore lead to the most bang for the buck since none of it would be saved.”

The CRS report also says that if tax cuts must be used they should be slanted toward low-income Americans, never Republicans’ favorite constituency. “The effectiveness of tax cuts also depends on their nature… tax cuts received by lower income individuals are more likely to be spent.”

Particularly useless are corporate tax cuts, which are one of the cornerstones of the GOP’s stimulus alternatives. One such alternative pushed by Senator Jim DeMint was a package of tax cuts that included cutting the corporate income tax by roughly one-third. CRS is not excited about the prospect:

Most evidence does not suggest that business tax cuts would provide significant short-term stimulus. Investment incentives are attractive, if they work, because increasing investment does not trade off short term stimulus benefits for a reduction in capital formation, as do provisions stimulating consumption. Nevertheless, most evidence does not suggest these provisions work very well to induce short-term spending. This lack of effectiveness may occur because of planning lags or because stimulus is generally provided during economic slowdowns when excess capacity may already exist. Of business tax provisions, investment subsidies are more effective than rate cuts, but there is little evidence to support much stimulus effect.

One wonders what the congressional Republicans’ sin is. Have they simply not read the economic research, including some from within the Congress itself, that suggests their ideas are not good for the nation? Or are they aware of the truth but choose to ignore it, because their united opposition makes life difficult for the new president and their embrace of tax cuts at all costs will always be popular with voters? They must hope that as they push debunked economic proposals, voters don’t come to the conclusion that their party is either incompetent or disingenuous.