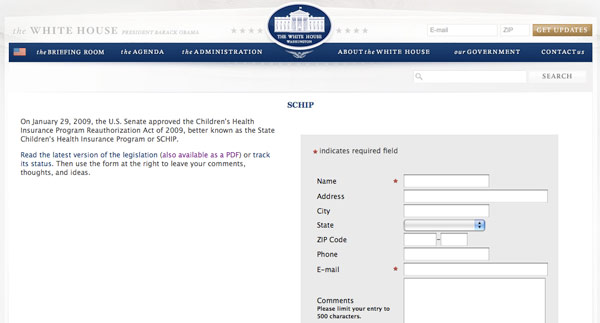 If you have an opinion on the expansion of children’s health insurance, hop on over the White House website, where the SCHIP bill is open for comments. If Obama’s campaign promise is followed, commenting will last for five days, at which point the President will sign the bill.

While the move is an admirable nod to openness, it’s more of a presidential party trick than anything else. Here’s why:

(1) Public comments aren’t made public. The page that I link to above points you to the full text of the SCHIP legislation and has a submission field for a comment, but it does not display previously made comments. I submitted a comment and it was swallowed up by the White House website, presumably never to be seen again.

When the Obama team was in transition, it hosted a site called “Seat at the Table” that enabled everyday citizens to view the policy papers that think tanks and interest groups were submitting to the President-elect. The site allowed users to comment and read the comments of others. That model ought to be followed on the White House website now. If comments could be viewed by everyone, one everyday citizen could identify a problem with the legislation, another could research it further, and a third could suggest a better idea. People could work together to push for improved law. And that’s the point, isn’t it?

(2) There is no guarantee that administration officials will actually read the comments. The transition website had a feature called “Open for Questions” that allowed users to submit questions to top Obama officials and to vote up or down the questions of others. Popular questions were answered on a somewhat haphazard schedule (and never in fully in-depth way) but at least there was an guarantee that someone was paying attention. The same cannot be said for the five-day commenting period.

(3) The bill has already passed both the House and the Senate. There is no mechanism in the legislative process to change it now that it is on the president’s desk. (Obama could use a presidential signing statement, an old Bush Administration trick. But Obama and his camp frowned upon the practice during the campaign.) “All they can do is veto it,” says Ellen Miller, Executive Director of the Sunlight Foundation. Given that Obama isn’t going to veto something like a long-sought children’s health care bill, one has to wonder if this is little more than a way to generate good PR. “It is far more important to have this kind of opportunity for the public to comment during the legislative process,” says Miller, “when changes could actually be made.”

(4) The site demands that users fit their comment inside 500 characters. The paragraph above is 621. “The notion that there can be quality commenting in 500 characters on a piece of legislation is laughable,” says Miller.

Miller suspects that the Obama team simply screwed up. The first bill Obama signed was the Lilly Ledbetter Fair Pay Act. He did so without making the bill available for comment at all, a fact that earned him the scorn of the transparency community and his first broken promise from PolitiFact.com. That led to the subpar commenting system up now. Says Miller, “They realized they goofed last week and they really needed to create this feature immediately, so they did a very simple, very straight-forward feature. I have every expectation that the ability to comment will become far more meaningful than it is right now.”

Fostering legitimate public comment on legislation is clearly a difficult challenge. It does not appear the Obama Administration has the solution just yet.