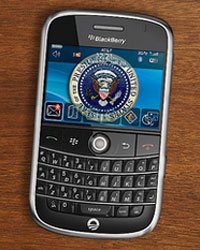 The Obama administration was supposed to bring a new era of accountability and transparency to Washington. But two nonprofits are complaining that the new President is taking the Bush administration line—at least for now—on a big issue: what to do (or not to do) about millions of missing White House emails.

The day after Obama was sworn in as President, the Justice Department filed a motion to dismiss a case brought by Citizens for Responsibility and Ethics in Washington (CREW) and the National Security Archive. The two watchdogs want to force the administration to prove that it has recovered all missing emails and has taken steps to prevent any more emails from being lost. Last Friday, the Obama administration missed a deadline to withdraw its motion. “If they didn’t want to litigate this, they would have withdrawn or asked to hold their motion,” says Anne Weismann, CREW’s chief counsel. “I would have taken that as a sign of good faith.”

When asked about the Obama administration’s apparent adoption of the Bush strategy at Monday’s White House press briefing, press secretary Robert Gibbs said, “This administration and this presidency seek a different amount of transparency than Washington has seen,” and quipped, “Dare I say email the Justice Department” about the seeming disconnect. But other administration officials were adamant that they could not comment about pending litigation.

It could be that the administration is working behind the scenes to settle the case, as the Clinton administration did when the NSA sued it in the early 1990s. The plaintiffs would certainly be open to the prospect: Weismann told Mother Jones that her organization “would be very open to an interest on their part to settle this lawsuit.” But so far, Weismann says, she hasn’t noticed “a difference” from the Bush administration’s legal strategy. “When we approached them about the possibility of finding a non-litigation way to resolve this, the response so far has been opposition,” she said.

But the Obama team’s moves in this case so far echo Bush administration’s strategy. In its motion to dismiss, the White House claims that missing emails are already being recovered and the suit is no longer necessary—exactly the same claim the Bush White House made throughout the second half of 2008. But the plaintiffs say that the efforts the White House has taken are still insufficient. “The motion that they filed suggests some activity but it definitely doesn’t suggest sufficient activity to save the emails,” says Meredith Fuchs, the general counsel for the National Security Archive.

The National Security Archive has sued every president since Reagan over email archiving. In its latest filing (PDF), the National Security Archive calls the motion to dismiss “no more than the latest in a long series of stonewalling tactics, which a less charitable litigant might characterize as a cover-up.” The plaintiffs claim that the issue at the heart of the lawsuit is the very transparency Gibbs said Obama wants to bring to Washington. After all, the plaintiffs have struggled for months to find out exactly what the White House has done to recover missing emails (perhaps millions) and prevent further losses. The little information that has emerged in court filings has not given the National Security Archive or CREW much comfort. “We have no assurance that the Obama administration is now using an appropriate method to archive emails,” Weismann says. “Do they intend, in the near future, to put in place a new record-keeping system? I would hope so, but I don’t know that for a fact. They haven’t told us anything.”

Fuchs says it’s hard for the plaintiffs to determine how close the White House is to having an appropriate, legally compliant archiving system without more disclosure: “It’s conceivable that what they’ve done is 95 percent of the way there. It’s conceivable it’s 50 percent of the way there. It’s conceivable it’s almost nothing. But we have so little information about what they’ve done, it’s very difficult for us to assess whether emails are safe at this point.” The bottom line, she says, is that, “from what we’ve read [in White House legal filings], we believe emails are still at risk and still have not been restored.”