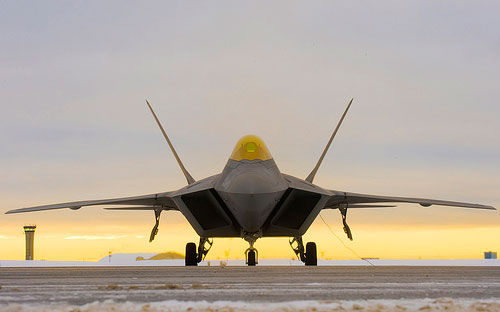 Photo by flickr user <a href="http://www.flickr.com/photos/lockheedmartin/3209316559/">Lockheed Martin</a>. Used with permission.

When all is said and done, it may be Secretary of Defense Robert Gates, a Republican, who is seen as Barack Obama’s most revolutionary cabinet pick. The Boston Globe reported Tuesday morning that Gates is poised to make “the most far-reaching changes in the Pentagon’s weapons portfolio since the end of the Cold War,” and plans to cancel as many as six major weapons programs this month, including the F-22, the Navy’s Zumwalt-class destroyer, and new Army ground transports.

Cutting these programs won’t be easy. When Dick Cheney was Secretary of Defense, the Globe notes, he tried to cancel the V-22 Osprey four times. Each time Congress resurrected the program. Big weapons programs mean jobs for states, and members of Congress don’t want to be blamed for their cancellation, especially in a recession. Besides, if this was easy, it would already have been done: the F-22, for example, has not even been used in the wars in Afghanistan and Iraq. But that hasn’t stopped it from being built. Andrew Exum (a.k.a. abu muqawama), a fellow at the Center for a New American Security and a top counterinsurgency blogger, writes: “Prepare to fight three wars at once: one in Afghanistan, one in Iraq, and one in Washington against the bi-partisan coalition of lobbyists, congressmen, and industry leaders who will fight Robert Gates tooth and nail on this. It is going to be awesome to watch, that’s for sure.”

Rep. Barney Frank (D-Mass.) has been campaigning against out-of-control military spending and “Cold War-era weapons” like the F-22 for a quarter-century now. Last month, he and other liberal Democrats hosted a forum on Capitol Hill demanding Obama cut the Pentagon budget and shutter programs like the ones Gates plans to kill later this month. Obama’s budget increase for the Pentagon, announced just a few days later, was a setback for Frank and his allies. But now it looks like Frank may have a friend in the Pentagon after all. The next few weeks should give us a better sense of exactly what kind of change Gates can push through.