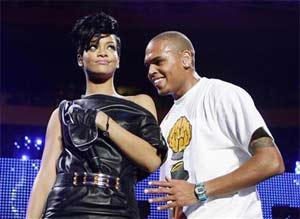 If you, like me, have been watching the Rihanna/Chris Brown scandal unfold with sick horror, get ready to have that feeling step up to a scream/hurl combo. Reuters is confirming TMZ’s reports that Brown and his alleged victim of assault have been in the studio working on a “love song.” The song was originally meant for Rihanna alone, but producer Polow Da Don apparently thought it would be a super idea to have Brown join in and make it a duet. The track’s themes apparently touch on “overcoming difficult challenges as a couple.” Insert scream/hurl noise here. A source told TMZ that the recording sessions were “very emotional… the feeling in the room was pure love.” Insert louder scream/hurl noise here. Apparently the producer urged them to hurry up and record the track, since “the heightened emotions would translate powerfully into the music.” Insert enormous scream/hurl noise here with additional sound of head exploding.