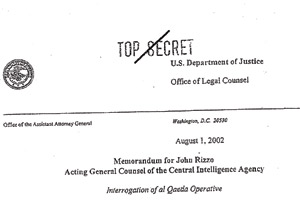 Bugs? The CIA tried to use bugs to get a suspected terrorist to spill secrets?

That’s one piece of information contained in four once-secret memos written by Bush Justice Department officials to justify the use of coercive techniques–aka torture. The previously undisclosed memos, released on Thursday, were each produced by the Office of Legal Counsel in response to requests from the CIA for legal guidance. They outline specific procedures the CIA wanted to use on detainees–including waterboarding. Referring to these documents, Attorney General Eric Holder said, “The President has halted the use of the interrogation techniques described in these opinions, and this administration has made clear from day one that it will not condone torture. We are disclosing these memos consistent with our commitment to the rule of law.”

In the first of the four memos–this one dated August 1, 2002–the OLC okays a CIA request to use 10 procedures during the interrogation of Abu Zubaydah, a captured al Qaeda leader whom the agency believed was withholding information about plans for attacks within the United States. The tactics included “facial slap (insult slap),” sleep deprivation, confinement in a small space, and waterboarding. Also on the list: putting insects in the “confinement box” with Zubaydah.

The OLC approved all of this, noting that none of the procedures would cause “severe physical or mental pain or suffering.” As for the insect treatment, the CIA had informed OLC that its interrogators intended to tell Zubaydah they were confining him in a small space with a stinging insect but would actually “place a harmless insect in the box,” such as a caterpillar. The memo notes the CIA had informed OLC that Zubaydah “appears to have a fear of insects.” Curiously, in the section of the memo describing these 10 techniques, only the part on the insect scheme contains a sentence (or two) redacted.

The OLC did have a warning for the bug-wielders of the CIA. If the CIA interrogators were to place “harmless” insects inside a confinement box containing Zubaydah and were to tell him about it, the OLC said, they would also have to inform Zubaydah that the bugs “will not have a sting that would produce death or severe pain.” And if they were not going to tell him about the bugs, the OLC said, then the CIA interrogators could not lead him to believe that there might be bugs present that could cause severe pain or death. Got it?

As for waterboarding, the OLC said, full-speed ahead, even though it noted that the procedure caused the perception of “suffocation and incipient panic.” The memo–signed by Jay Bybee, then the assistant attorney general–pointed out that the OLC had previously concluded that “severe pain” is “pain that is difficult for the individual to endure and is of an intensity akin to pain accompanying serious physical injury.” But the OLC maintained in this memo that the experience of being waterboarded was not covered by this definition. Waterboarding, the memo concluded, “inflicts no pain or actual harm whatsoever.” The memo continued: “The waterboard is simply a controlled acute episode, lacking the connotation of a protracted period of time generally given to suffering.”

The memo did note that “the use of the waterboard constitutes a threat of imminent death.” But the OLC asserted that for this threat to be equated with “severe mental pain or suffering” it must be “prolonged”–meaning “lasting months or years.” In other words, a physical act producing that was like suffocation that could be perceived as a “threat of imminent death” would not constitute “torture.”

The OLC also informed the CIA that for any of its interrogators to be open to a torture charge, he or she would have to had “the specific intent to inflict severe pain or suffering.” And, in OLC’s view, the objective of the interrogators using waterboarding and these other techniques was not to cause pain; it was to obtain information. Thus, they were free to proceed. But the memo ends on a less-than-solid note. “We wish to emphasize,” the memo said, “that this is our best reading of the law; however, you should be aware that there are no cases construing [the anti-torture] statue; just as there have been no prosecutions brought under it.” That is, go ahead but don’t blame us if someone later on raises a fuss–about waterboards or bugs.

UPDATE: A May 10, 2005, OLC memo noted in a footnote: “We understand that–for reasons unrelated to any concerns that it might violate the [anti-torture] statute–the CIA never used that [insects] technique and has removed it from the list of authorized interrogation techniques.” The memo did not explain why the CIA dropped the bugs.

For a collection of Mother Jones articles on torture, click here.