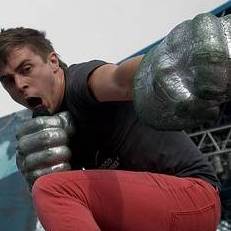 Nearly a year ago (June 3, 2008) in Minneapolis Denver, Illinois junior senator Barack Obama captured the Democratic nomination for president of the United States of America. Obama celebrated the event by bumping knuckles with his wife, a brief physical gesture whose public discussion would quickly become overwhelming. Well, it’s time to celebrate that gesture again: next Wednesday, June 3, will be National Fist Bump Day. According to organizers of the event:

A group of like-minded people have gotten together to commemorate Obama’s grand gesture, but also to take the fist bump to a higher level, one above partisan politics and social divides. For one day we are calling for Americans, and perhaps even all global citizens, to put aside their differences — be they class, race, religion or values — and show their respect with a little bump.

A fist bump? A pound? A terrorist fist jab? The gesture everyone seems to interpret differently. We’ll show you some interesting body communication and find out what it really says.

It’s unknown that anyone before Hill called it a terrorist fist jab (nor is it clear how law-abiding Americans would know what greeting gestures the world’s freedom fighters prefer). And after all that the Fox segment failed to make good on its promise to explain what the first bump “really says.” But there it was: the fist bump heard ‘round the world.

The gesture is hardly new. Fist bumping (the right hands of two people making contact via knuckle touching) as a gesture of greeting or affection has been around since at least the 1970s. We don’t know whether the motion evolved from the handshake or the high five but since it’s an imaginative urban/adolescent gesture, I suspect it’s a bit of both.

Thomas Jefferson is said to be the first U.S. president to shake hands; before that, bowing was standard etiquette. While it’s somewhat unlikely Obama will usher in a new standard for polite salutation, the organizers of next Wednesday’s event aim to ensure that the fist bump stays with us… at least for the duration of the Obama administration.