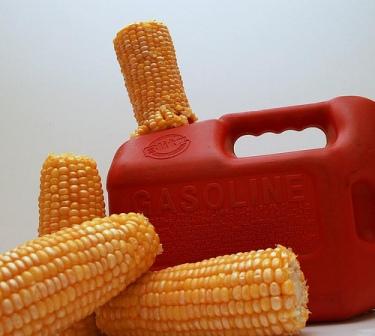 In what may be this week’s worst amendment to the Waxman-Markey climate bill, a midwestern Congressman has introduced a provision that would ban the EPA from accounting for the full carbon footprint of biofuels.

Collin Peterson (D-Minn.), the powerful chair of the House Committee on Agriculture, is expected to attach the amendment before releasing the bill to the House floor, where a vote is expected as early as tomorrow. The change would prevent the EPA from accounting for the way that growing biofuel crops in the U.S. drives food production abroad, causing deforestation that contributes to climate change. Ignoring this “indirect land-use change“–the technical term for a phenemon that can account for up to 40 percent of corn-based ethanol’s carbon emissions–would allow the fuel to qualify under the 2007 Renewable Fuel Standard, making it eligible for government subsidies.

In effect, the ethanol industry is hiding behind the difficulty of calculating its own environmental footprint. Though the EPA  has already devised a method to account for the land-use impacts of biofuels, the amendment prohibits the agency from implementing it for six years, at which point the National Academy of Sciences will have completed a study that is supposed to resolve lingering uncertanties with the method.

Yet those “uncertainties” are much smaller than Congress wants to admit. In California, regulators have already spent the past year and a half closely studying ethanol’s land use impacts (part of an effort to calculate how it could be used to meet the state’s Low Carbon Fuel Standard, which mandates a 10 percent reduction in the greenhouse gas intensity of all fuels by 2020). The state commissioned three major universities to study the issue, held numerous workshops with industry, reviewed the ample peer-reviewed literature on the subject, and ran models to test its assumptions. The result? A finding that corn-based ethanol would at the very best release 18.7 percent less greenhouse gas than conventional fuel–still not enough to meet the 20 percent reduction needed to qualify for the federal Renewable Fuel Standard.

And that’s the rosiest scenario. When the state accounted for more realistic land-use impacts, four of the 11 corn-based ethanols it reviewed released more greenhouse gasses than regular gasoline.

So here’s California’s message to Congress: “There is an uncertainty associated with land-use emissions of biofuels,” grants Anthony Eggert, science and technology policy advisor to the California Air Resources Board. “But we do know enough to know that there is an impact. It’s not zero. And we think our estimate that we currently have is a good one.”