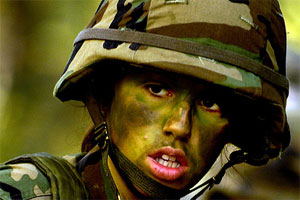 This is Part I of a Mother Jones special report on the defense budget. Click the links for Part II, III, IV and V.

The Defense Budget That Dare Not Speak Its Name

Somewhere in the middle regions of Barack Obama’s Herculean to-do list is a task that’s defeated many of his predecessors: taming the runaway Pentagon budget. Earlier this year, to much fanfare, Obama and his defense secretary, Robert M. Gates, released a Defense Department budget proposal that slashed several troubled weapons programs and promised further reforms to combat rampant waste. But although the press touted the proposals as bold and ambitious, they sounded suspiciously like the basic budgeting tips a financial adviser would dispense if you’d lost total control of your personal expenses. The essential principles were:

Unfortunately, Washington pols have been saying similar things ever since the Defense Department was created. And over the years a nearly constant procession of blue-ribbon commissions and special taskforces and congressional crusades has attempted to tackle the problem and failed. (See, for example, the Fitzhugh Commission, the Grace Commission, the Nunn-McCurdy Amendment, the Packard Commission, the Carlucci Initiatives, the Defense Management Review, the National Performance Review, the Bottom-Up Review, the Federal Acquisition Streamlining Act, the Federal Acquisition Improvement Act, the Acquisition Streamlining Task Force, Total System Performance Responsibility, and the spiral development and capabilities-based acquisition initiatives.) Cost overruns for major weapons programs now total $296 billion. We could never afford this rampant squandering of public money, but now, with the economy in crisis, the need to end the Pentagon’s profligacy has become even more urgent.

But will Obama’s attempt at reform be any different from all those that have gone before? Over the next few weeks, Mother Jones will attempt to find out. We’ll dig into the gory details of Pentagon spending and watch out for porky shenanigans as Gates’ budget makes its way through Congress. We’ll take you behind the scenes to meet the key players who will determine whether the Pentagon cleans up its act or continues on with business as usual. Above all, we promise to do our best to make it interesting. You can read our reports here; if you have tips or questions that you want us to chase up, send them to rmorris@motherjones.com.

This year Obama asked Congress for $534 billion to fund the Department of Defense. That’s a lot of dough. But the real amount that the US spends on defense is actually much higher.

The Office of Management and Budget calculates a total for defense spending throughout different parts of the government (it includes money allocated to the Pentagon, nuclear weapons activities at the Department of Energy and some security spending in the State Department and FBI). In the 2010 budget, that figure was $707 billion, more than half of the government’s discretionary spending for the year. (Discretionary spending is the money that’s appropriated every year by Congress, rather than entitlement programs like Medicare for which funding is mandatory). 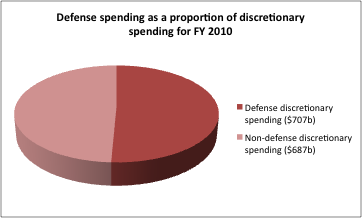 Source: Office of Management and Budget

But the real number is even higher, because, among other things, the OMB doesn’t count supplemental spending on the wars in Iraq and Afghanistan. We’ve combed through this year’s budget documents to add up military-related spending throughout the entire government. Here’s what we found:

As you’ll see, we leaned on the conservative side here by only counting money that’s directly related to military activities. We didn’t, for instance, add in money for the Department of Veterans Affairs ($55.9 billion), which would take the total to $836.3 billion; or the rest of the Department of Homeland Security ($54.5 billion), which would take it to $890.8. (The wider national security apparatus isn’t included either—budgets for the intelligence services are classified.) If we did include these extras, here’s what the difference between the official budget and the real one would look like: 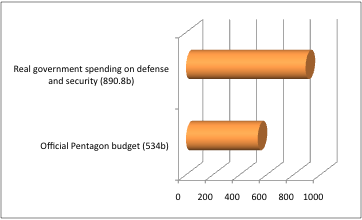